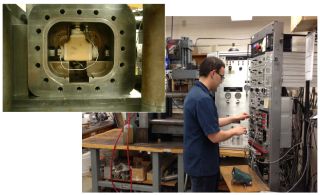 The rock mechanics lab at Penn State, where researchers study slow-slip earthquakes. The inset shows a block of clay-rich sediments inside a frame that applies forces that mimic those inside a fault.
(Image: © Demian Saffer and Chris Marone)

Slow earthquakes don't kill anyone, but they're certainly suspicious characters. Recent great earthquakes, such as massive temblors in Japan and Chile, were foreshadowed by slow quakes shuffling through the regions in the months before the deadly shaking struck.

The big difference between slow and regular earthquakes is speed. While the regular earthquakes with which most people are familiar release a burst of built-up stress in seconds, slow earthquakes release energy in ways that do little damage, either at low frequencies, or over days, months or years.

Scientists don't know how slow and regular earthquakes might be linked, but now new research brings them a step closer in understanding how slow earthquakes happen. It turns out that seafloor muck, which fills some offshore faults, plays a critical role in the slow-motion temblors, according to a study published May 12 in the journal Nature Geoscience.

"The clays, and the friction behavior of the clays [in the sediments], seem to be an important part of the story," said study researcher Demian Saffer, a geologist at Penn State University.

Working with an international team, Saffer and colleagues drilled into a fault in the Nankai Trough, located offshore near southwestern Japan. They collected clay-rich sediments from about 3,200 feet (1 kilometer) below the seafloor. The drilling site was directly above a spot where a recent swarm of slow earthquakes had struck, at about 2.5 miles to 3.7 miles (4 to 6 km) below the seafloor. [Image Gallery: This Millennium's Destructive Earthquakes]

With samples from the drill core, the researchers recreated the fault in a lab, then subjected it to the same type of shearing force that happens when the fault moves.

They found that the clay-rich sediments initially acted as a barrier, preventing the fault from breaking, Saffer said. Normally, this increasing friction would halt a growing earthquake. But as researchers kept slowly shearing the clays, the fault grew weaker until it broke in the equivalent of a slow earthquake.

It was the tiny clay grains that may have made all the difference, the researchers said. In a slow earthquake, the forces pressing on the fault may line up the clay grains, making it easier for each side of the fault to slip past one another.

"This previously undescribed slip-weakening would allow these fault zones to have earthquake like behavior after that initial suppression of slip," Saffer said. "This is a really tantalizing result that links rock behavior with these slow-slip events," he told OurAmazingPlanet.

The group now hopes to drill deeper into the seafloor off the coast of New Zealand, a spot frequently struck by shallow, slow earthquakes. "This is a real opportunity to measure the conditions directly, and tell the whole story," Saffer said.