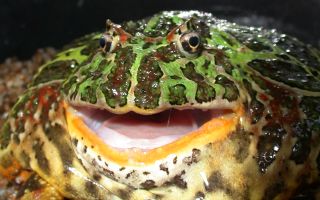 A group of modern frogs whose comically rotund bodies and giant mouths earned them the nickname "Pac-Man" frogs is attracting attention — not for the size of their maws, but for the power of their bite. And their extinct relative, known as a "devil frog," may have packed even more of a mouthy wallop, researchers reported in a new study.

Recently, researchers conducted the first measurements of bite strength in frogs. Initially, the scientists calculated the bite force in small "Pac-Man" frogs, also known as South American horned frogs. Then, the researchers scaled up their findings to determine bite force in an extinct relative, a giant, armored amphibian known as Beelzebufo ampinga, or "devil frog," that lived about 65 million to 70 million years ago.

The scientists' findings showed that the extinct devil frog would have had a vise-like mouth grip even more powerful than that found in living horned frogs. Combined with its enormous size, Beelzebufo's bite strength could have allowed the animal to prey even on juvenile dinosaurs, the scientists reported in a new study. [Eye-Swallowing and Mouth Birth: Freaky Facts About Frogs]

Most frogs have relatively weak jaws and feed on small prey that they subdue primarily with their sticky tongues, the study authors wrote. But roly-poly South American horned frogs in the genus Ceratophrys have an exceptionally powerful bite that allows them to snatch and hold prey almost as big as the frogs themselves. The researchers questioned how strong that bite would have been in similarly big-headed frogs that lived millions of years ago.

The scientists began by looking at Cranwell's horned frogs, testing the bite force of eight frogs measuring between 1.6 and 3.8 inches (4.0 and 9.6 centimeters) in length, with heads that were 0.6 to 1.3 inches (1.5 to 3.2 cm) long and 0.9 to 1.8 inches (2.2 to 4.6 cm) wide. Researchers had the frogs clamp their mouths on a force transducer — a device for measuring bite force — made of two metal plates padded with leather strips to protect the frogs' jaws.

Once the researchers knew the frogs' bite force, they could scale that measurement up by adjusting parameters such as the frog's head and body size and estimating the accompanying changes in muscle size, the study said. Next to the small "Pac-Man" frogs, the extinct devil frog was gargantuan, with a body measuring about 16 inches (41 cm) long and a head reaching about 6 inches (15 cm) in width.

The study's calculations predicted that at that size, the devil frog's bite would have been as powerful as that of a wolf or of an adult female lion or tiger. That certainly would make Beelzebufo capable of taking down small crocodiles or dinosaurs that shared its habitat — especially if its hunting habits were similar to the aggressive and tenacious chomp of the "Pac-Man" frogs, the researchers explained.

"Horned frogs have quite an impressive bite, and they tend not to let go," the study's lead author, A. Kristopher Lappin, a professor of biological sciences at California State Polytechnic University in Pomona, said in a statement.

Lappin noted that he spoke "from experience," though he did not provide details as to what exactly that experience was.

By comparison, the bite of the much larger — and possibly dinosaur-consuming — devil frog would have been "remarkable," Lappin said in the statement. "Definitely not something I would want to experience firsthand."

The findings were published online yesterday (Sept. 20) in the journal Nature: Scientific Reports.