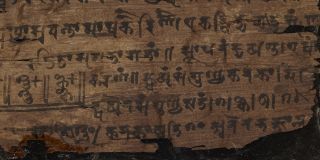 A magnified view of folio 16v shows the use of a dot as a placeholder on the bottom line.
(Image: © Copyright Bodleian Libraries/University of Oxford)

The concept of zero as a number was revolutionary in mathematics. Historians have long known the idea came from India, but its exact origins remain murky.

Now, the oldest Indian reference to the digit zero has been identified, in a manuscript dating back to the third or fourth century, scientists at the University of Oxford in England announced.

The University of Oxford's Bodleian Libraries has had the famous ancient Indian scroll, the Bakhshali manuscript, in its collection since 1902. A farmer dug up the text from a field in 1881 in the village of Bakhshali, near Peshawar in what is today Pakistan. It consists of 70 leaves of birch bark and contains hundreds of zeros in the form of dots. [Images: The World's 11 Most Beautiful Calculations]

These dots were not zeros like we think of the numeral today. Before zero came to be known as a number in its own right, it was used as a placeholder digit for building larger numbers (as the zero in 101 is doing). Other, more ancient cultures used similar placeholders, such as the Mayans, who used the symbol of a shell, and the Babylonians, who used a double wedge.

The placeholder zero in the Bakhshali manuscript is still "exciting" Marcus du Sautoy, a professor of mathematics at the University of Oxford, said in a statement, because it is "the seed from which the concept of zero as a number in its own right emerged some centuries later, something many regard as one of the of the great moments in the history of mathematics."

The concept of zero as the number representing absolute nothingness paved the way for algebra, calculus and computer science. The first text to discuss zero in the numerical sense is the Indian astronomer Brahmagupta's work "Brahmasphutasiddhanta," which was written in A.D. 628.

Previously, researchers had tried to determine the age of the Bakhshali manuscript by looking at its style of writing and language. A recent Japanese study concluded that the text was likely written between the eighth and the 12th centuries.

The study from Oxford used radiocarbon dating, a method for measuring the content of carbon isotopes in organic material to determine its age (an isotope is a variation of an element that has a different number of neutrons in its nucleus). The results produced a further complication: The Bakhshali manuscript might not be a single text but several texts.

"It is possible that the Bakhshali manuscript is made up of more than one text," one of the researchers, Camillo Formigatti, a Sanskrit librarian at the Bodleian Libraries, wrote in statement from Oxford. "More research is needed to better understand what the manuscript consists of."