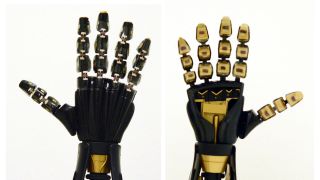 Rubber electronics and sensors that operate normally even when stretched to up to 50 percent of their length could work as artificial skin on robots, according to a new study. They could also give flexible sensing capabilities to a range of electronic devices, the researchers said.

Like human skin, the material is able to sense strain, pressure and temperature, according to the researchers.

"It's a piece of rubber, but it has the function of a circuit and sensors," said Cunjiang Yu, an assistant professor of mechanical engineering at the University of Houston. Yu and his team describedtheir innovation in a study published online Sept. 8 in the journal Science Advances. [Super-Intelligent Machines: 7 Robotic Futures]

Yusaid the rubber electronics and sensors have a wide range of applications, from biomedical implants to wearable electronics to digitized clothing to "smart" surgical gloves.

Because the rubbery semiconductor starts in a liquid form, it could be poured into molds and scaled up to large sizes or even used like a kind of rubber-based ink and 3D printed into a variety of different objects, Yu told Live Science.

One of the more interesting applications could be for robots themselves, Yu said. Humans want to be able to work near robots and to coexist with them, he said. But for that to happen safely, the robot itself needs to be able to fully sense its surroundings. A robot — perhaps even a soft, flexible one, with skin that's able to feel its surroundings—could work side by side with humans without endangering them, Yu said.

In experiments, Yu and his colleagues used the electronic skin to accurately sense the temperature of hot and cold water in a cup and also translate computer signals sent to the robotic hand into finger gestures representing the alphabet from American Sign Language.

Electronics and robots are typically limited by the stiff and rigid semiconductor materials that make up their computer circuits. As such, most electronic devices lack the ability to stretch, the authors said in the study.

In research labs around the world, scientists are working on various solutions to produce flexible electronics. Some innovations include tiny, embedded, rigid transistors that are "islands"in a flexible matrix. Others involve using stretchy, polymer semiconductors. The main challenges with many of these ideas are that they're too difficult or expensive to allow for mass production, or the transmission of electrons through the material is not very efficient, Yu said.

This latest solution addresses both of those issues, the researchers said. Instead of inventing sophisticated polymers from scratch, the scientists turned to low-cost, commercially available alternatives to create a stretchy material that works as a stable semiconductor and can be scaled up for manufacturing, the researchers wrote in the study.

Yu and his colleagues made the stretchable material by mixing tiny, semiconducting nanofibrils — nanowires 1,000 times thinner than a human hair — into a solution of a widely used, silicon-based organic polymer, called polydimethylsiloxane, or PDMS for short.

When dried at 140 degrees Fahrenheit (60 degrees Celsius), the solution hardened into a stretchable material embedded with millions of tiny nanowires that carry electric current.

The researchers applied strips of the material to the fingers of a robotic hand. The electronic skin worked as a sensor that produced different electrical signals when the fingers bent. Bending a finger joint puts strain on the material, and that reduces electric current flow in a way that can be measured.

Using the electrical signals, the researchers were able spell out "YU LAB" in American Sign Language.

Yu said he and his colleagues are already working to improve the material's electronic performance and stretchiness well beyond the 50 percent mark that was tested in the new study.

"This will change the field of stretchable electronics," he said.