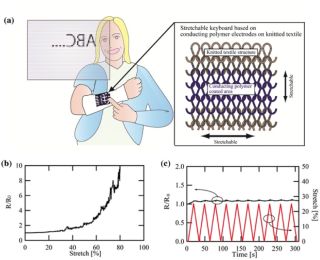 The Apple Watch and Google Glass are some of the most widely known wearable devices, but the ways users can interact with these "smart" gadgets are limited. For instance, it would be pretty difficult to type a message out on the face of a watch. And forget even trying with a pair of smart glasses. But now, researchers have developed wearable keyboards made of electronics knitted together like fabric that could lead to a new kind of human-machine interface.

Right now, the key way that people interact with computers is by using the keyboard, researchers say. However, creating wearable keyboards for wearable electronics is a challenging task — such keyboards have to be large to fit enough keys to be useful, and must be flexible and stretchable to follow the movements of the human body.

In the past three years or so, researchers have tried to make electronics more wearable by making them like clothing — for instance, by knitting wires together into fabrics. These electronic textiles can get stretched up to the limit where the fibers are straightened. Such technology "provides a simple way to interact with machines," said Esma Ismailova,a polymer science engineer at the National School of Mines in Gardanne, France, andco-author of a new study describing the new keyboards. [Best Smartwatches 2015 – Buying Guide]

The scientists used electrodes to connect this circuit to a computer. Square and rectangular patches of the circuit served as the keys of a keyboard. Pressing down onthese patches generated easily detectable electrical signals.

The prototype keyboard can be worn on a sleeve and has 11 keys, representing the numbers 0 to 9 as well as an asterisk. The researchers noted that this fabric could be stretched by up to 30 percent and that after 1,000 cycles of stretching and relaxation, the fabric stayed about 90 percent as electrically conducting as it did at the start.

"A wearable keyboard would provide a more intuitive interface for tactile input than the touch-sensitive face of a smartwatch or the hand gestures that control devices such as the Google Glass," Ismailova told Live Science.

The researchers suggested that textile keyboards could be woven not only into clothing, but also into furniture, wallpaper and other surfaces. Such technology "promises to enrich our daily lives with smart accessories and to change the way we interact with computers," Ismailova said.

The researchers belong to a French consortium working on biomedical applications of textiles, which also includes companies interested in commercializing aspects of this work.

"One could envision, for example, using such a keyboard to control their smartphone, activity-tracking device or, down the road, an implantable medical device," Ismailova said. "It is a rather straightforward technology, so I would expect some applications in less than five years. Applications in biomedical — for example, textile electrodes for monitoring the heart — might take a bit longer due to regulations."

The scientists detailed their findings online Nov. 30 in the journal Advanced Materials.