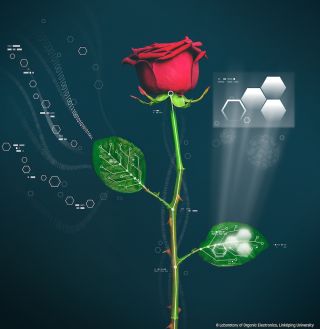 Scientists have created roses that have self-assembling electronic circuits inside them. The method could one day help produce self-monitoring plants.
(Image: © Linköping University)

Scientists have created a kind of cyborg flower: living roses with tiny electronic circuits threaded through their vascular systems.

The miniscule electronic polymers are inserted into the plant, then almost magically self-assemble thanks to the rose's internal structure.

"In a sense, the plant is helping to organize the electronic devices," said study co-author Magnus Berggren, an organic electronics researcher at Linköping University in Sweden. [Biomimicry: 7 Clever Technologies Inspired by Nature]

The strange cyberplants could one day make it possible to tell flowers when to bloom to avoid an impending frost, or when to put out hormones to prevent a drought.

Berggren and his colleagues have actually been trying to make electronic plants for about a decade. The team focused on rose bushes because they have all the elements of a tree — such as bark, leaves, petioles (stalks that connect leaves to the plant's stem) and a distinctive root system — but they are compact, hardy and available at every corner flower shop.

But every electronic ingredient the team tried seemed to have a flaw. Some spurred the plant to release toxic compounds, essentially poisoning the plant. Others clogged the xylem, or the vascular tissue, used to transport water inside a plant.

A rose by any other name

The team decided to keep trying with other materials. Lead author Eleni Stavrinidou, a postdoctoral researcher in Berggren's lab, cut the stems of roses and then placed the roses in a solution with a variant of the organic polymer poly(3,4-ethylenedioxythiophene) called PEDOT-S:H, which has good electrical conductivity when hydrated.

After the cut flowers had soaked in the solution of PEDOT-S:H for a day or two, the team peeled back the outer layers of the rose bark, revealing tiny "wires" of the organic polymer that had snaked up 2 inches (5 centimeters) into the stem, the researchers reported Nov. 20 in the journal Science Advances.

"There was a moment during the screening when Eleni [the lead author] showed us all these beautiful wires," Berggren told Live Science. "When I saw those, I immediately understood it was possible to make electronic circuits."

A few days later, the team demonstrated that the wires had electrical conductivity. Since then, the researchers have also created self-assembling series of transistors, one of the fundamental elements of a sensor network.

"If we combine the sensors with delivery devices, we could make a neuronal system to record and sense and regulate the physiology of the plant," Berggren said.

So far, the researchers have made electrical networks up to 8 inches (20 cm) long, and have used slightly different techniques to embed electrical circuits in plants with a different structure, such as celery, Berggren said.

The new embedded sensor network could one day be used to prevent flowers from blooming when a frost is on the way. It could also be used to preferentially improve a plant's productivity when weather conditions are right, Berggren said.

Of course, scientists routinely use genetic engineering to alter the water demands, flowering process and hardiness of plants. Plant genetic modification is safe, well-understood and extremely easy to do. So why go to the trouble of embedding electronics for the same purpose?

Changing some traits, such as flowering time, may be too disruptive to an ecosystem if done permanently, especially if those changes could propagate through forests and fields, Berggren. But an electronic switch would be reversible, he said. Ultimately, Berggren sees plants of the future combining both genetic engineering and electrical sensors, he said.

For food crops, scientists would have to show that organic polymers don't make it into the fruits, seeds or edible portions of the plant. And ultimately, the team hopes to use biological chemicals, such as chlorophyll, to create the electronic circuits, bypassing the potential for environmental contamination as a result, Berggren said.