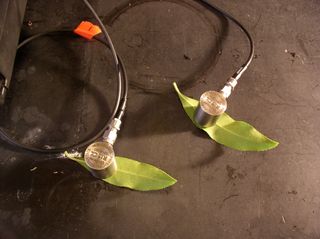 The forest really does hum with life.

Though often too low or too high for human ears to detect, insects and animals signal each other with vibrations. Even trees and plants fizz with the sound of tiny air bubbles bursting in their plumbing.

And there is evidence that insects and plants "hear" each other's sounds. Bees buzz at just the right frequency to release pollen from tomatoes and other flowering plants. And bark beetles may pick up the air bubble pops inside a plant, a hint that trees are experiencing drought stress.

Sound is so fundamental to life that some scientists now think there's a kernel of truth to folklore that holds humans can commune with plants. And plants may use sound to communicate with one another.

If even bacteria can signal one another with vibrations, why not plants, said Monica Gagliano, a plant physiologist at the University of Western Australia in Crawley.

"Sound is overwhelming, it's everywhere. Surely life would have used it to its advantage in all forms," she told OurAmazingPlanet.

Gagliano and her colleagues recently showed corn seedling's roots lean toward a 220-Hertz purr, and the roots emit clicks of a similar tune. Chili seedlings quicken their growth when a nasty sweet fennel plant is nearby, sealed off from the chilies in a box that only transmits sound, not scent, another study from the group revealed.  The fennel releases chemicals that slow other plants' growth, so the researchers think the chili plants grow faster in anticipation of the chemicals — but only because they hear the plant, not because they smell it. Both the fennel and chilies were also in a sound-isolated box.

"We have identified that plants respond to sound and they make their own sounds," Gagliano said. "The obvious purpose of sound might be for communicating with others."

Gagliano imagines that root-to-root alerts could transform a forest into an organic switchboard. "Considering that entire forests are all interconnected by networks of fungi, maybe plants are using fungi the way we use the Internet and sending acoustic signals through this Web. From here, who knows," she said.

As with other life, if plants do send messages with sound, it is one of many communication tools. More work is needed to bear out Gagliano's claims, but there are many ways that listening to plants already bears fruit.

When the bubble bursts

Scientists first recognized in the 1960s that listening to leaves revealed the health of plants.

When leaves open their pores to capture carbon dioxide, they lose huge amounts of water. To replace this moisture, roots suck water from the ground, sending it skyward through a series of tubes called the xylem. Pit membranes, essentially two-way valves, connect each of the thousands of tiny tubes. The drier the soil, the more tension builds up in the xylem, until pop, an air bubble is pulled in through the membrane.

For some plants, these embolisms are deadly — as with human blood vessels — because the gas bubbles block the flow of water. The more air in the tubes, the harder it is for plants to pull in water, explains Katherine McCulloh, a plant ecophysiologist at Oregon State University.

But researchers who eavesdrop on plant hydraulics are discovering that certain species, like pine trees and Douglas firs, can repair the damage on a daily or even an hourly basis.

"These cycles of embolism formation and refilling are just something that happens every single day. The plant is happy, it's just day-to-day living," McCulloh said. "In my mind, this is revolutionary in terms of plant biology. When I learned about how plants moved water, it was a passive process driven by evaporation from the leaves. What we're beginning to realize is that's just not true at all. It's a completely dynamic process."

How to listen to plants

The technology to hear plant bubbles explode is actually quite simple. Acoustic sensors designed to detect cracks in bridges and buildings catch the ultrasonic pops. A piezoelectric pickup, the same as an electric guitar pickup, goes through an amplifier to an oscilloscope that measures the waveform of each pop. The acoustic sensor is pricey, but Duke University botanist Dan Johnson has funding from the National Science Foundation and the U.S. Department of Agriculture to build a low-cost version this summer. He'll give the embolism detector to high school students at the North Carolina School of Science and Mathematics in Durham.

Two geologists in Arizona are also building a low-cost acoustic detector, crowd-funded at about $1,000, drawn by the age-old allure of communicating with plants.

"We became fascinated with the thought of being able to listen in to the plumbing of the saguaro cactus," said Lois Wardell, owner of Tucson-based consulting firm Arapahoe SciTech. Starting with a 3-foot-tall potted saguaro, Wardell and geophysicist Charlotte Rowe hope to distinguish between cacti drying out and those complaining about other environmental stress.

What plants say about drought

Acoustic emissions, or the sound of bursting air bubbles, could also upend assumptions about the effects of drought on plants.

In the arid Southwest, Johnson was surprised to find that the plants considered the most drought-tolerant, such as junipers, did worst at repairing embolisms. Broad-leaf plants, including rhododendrons and beaked hazels, were better at fixing the damage caused by dry pipes.

"With the incredible drought going on there right now, the species we predicted to die are exactly the opposite of what's occurring," Johnson said. "We're seeing a lot of deaths in junipers, and those are typically the most drought-resistant in that area, whereas most of the broad-leaf systems go dormant and they repair whatever embolisms occur the next spring, when there's more water."

Johnson predicts that in future severe droughts, the plants that have a harder time repairing embolisms are more likely to die. "It's the plants that can repair embolisms that are going to survive," he said. [Gallery: Plants in Danger]

Living in drought-stricken Australia, Gagliano is also excited by the possibility of decoding drought signals. "We don't know if these emissions are also providing information to neighborhoods of plants," she said. "Plants have ways of protecting themselves when they run out of water, and they are really good at sharing information about danger, even if one sharing is one that's going to die."

Sensing sound by touch instead?

Critics of Gagliano's research point out that no one has found structures resembling a mouth or ears on corn or any other plant. Nor do the group's studies prove that plants "talk" among themselves.

"This is pretty provocative and worth following, but it doesn't really provide a lot of evidence that these are acoustic communications," said Richard Karban, a University of California, Davis, expert in how plants communicate via chemical signals.

But simpler life forms manage just fine without complex sound receptors and producers. Walnut sphinx caterpillars whistle by forcing air out of holes in their sides. Flying insects perform death drops when they sense a bat's sonar clicks. Earthworms flee the vibrations of oncoming moles. [Listen to caterpillars communicate with their butts]

Of course, there may be another explanation for the apparent response to sound reported by Gagliano. One that could also account for the century of researchers and home gardeners (including Charles Darwin) who manipulated plant growth with music.

Could a sense of touch be why plants seem to respond to sound?

Even humans can perceive sound without hearing it, said Frank Telewski, a botanist at Michigan State University and an expert on how trees respond to wind.

"How many times have you sat next to someone who has their car stereo at full blast? You can really feel it pounding in your chest," he said.

Trees perceive and respond to touch, like wind or an animal passing on a trail. And like the wind, sound is a wave that travels through air.

In fact, a tree needs wind to grow, Telewski said. "If you stake down a seedling, you do it a little bit of disservice, because a tree needs to perceive motion. It's like physical therapy for the tree. If you stake it too tight, it does not allow the plant to produce stronger tissues."

But Telewski is open to the idea of plant communication by sound. He said in the last few years, researchers in China have shown they can increase plant yields by broadcasting sound waves of certain frequencies. Other groups have investigated how different frequencies and intensities of sounds change gene expression. Their studies find that acoustic vibrations modify metabolic processes in plants. Some of the beneficial vibrations also drive away pesky insects that munch on crops.

"We're not there yet," Telewski said of the effort to prove plants communicate. "Sometimes a fantastic hypothesis can turn out to be true, but there has to be fantastic evidence to support it."

Karban, from UC Davis, notes that the plant field is not very receptive to new ideas. The idea that plants could talk via scent, or volatile chemicals, was roundly pooh-poohed in the 1980s, but Karban and others went on to prove that plants including sagebrush warn their neighbors of impending danger by wafting chemical signals into the air. "At times in my career I've tried to push new ideas and it's been very difficult," Karban said.

Gagliano remains undeterred by the skepticism.

"I was guided to sound by the long tradition in folklore of people talking to plants and listening to plants and plants making sounds," Gagliano said. "I wanted to see if there was any scientific basis for something that stays so stubbornly in our culture."

But the corn root clicks are at the lower end of the human hearing range. "In theory, we could hear it, but realistically, these were emitted from roots in the ground, so the truth is we probably wouldn't hear it," she said. And the fizzy bubble bursts in xylem are ultrasonic, about 300 kiloHertz, detectable only by insects and some other animals.

This spring, Gagliano and her collaborators will screen more plants for communication skills. "We will see whether some groups of plants might be more chatty than others, and if some plants have specific requirements for sound," she said. They also plan to record sounds emitted from plants and play them back and see what kind of response, if any, they produce in other plants.

"Shamans say they learn from the plant's sounds. Maybe they are attuned to things we don't pay attention to," Gagliano said. "It's really fascinating. We might have lost that connection and science is ready to rediscover it."