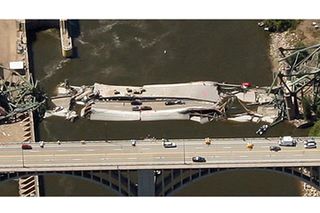 An aerial view of the collapsed westbound lanes of the Interstate 35 bridge in Minneapolis taken on Aug. 2, 2007.
(Image: © Minnesota Department of Transportation)

The I-35W bridge collapsed in the middle of the evening rush hour on August 1, 2007. When the eight-lane highway spanning the Mississippi River in Minneapolis collapsed from the center out without warning, 100 cars plummeted into the water, 13 people were killed and 145 were injured.

The bridge, which connected downtown Minneapolis with an area near the University of Minnesota, carried 140,000 cars a day. Had engineers been warned the structure was failing early on, they could have shut off traffic and saved lives and prevented commuter discombobulation.

Engineers at the University of Maryland are working on smart bridges that can provide just such a warning, using tiny wireless sensors that feed data into computers programmed to burst out email or text messages to highway engineers when something is amiss.

Many new bridges have sensors wired into networks now, including the Minnesota I-35W replacement, but the Maryland researchers think it often is cheaper to go wireless. The sensors can either be built into the structure when the bridge is built, or retrofitted later.

"There are a large number of bridges out there that are 30-40 years old, and replacement of these structures with new ones is not an option," said Mehdi Kalantari, a research engineer at Maryland. The current bridges are being used by commuters every day and the cost of replacing them would be prohibitive, he said.

Kalantari has developed a system that retrofits existing bridges with tiny monitors that measure everything from temperature and humidity to pressure, tilt, deformation, and crack activity. The sensors monitor changes in the bridges' structure and sends the information to computers for analysis.

The sensors are rectangular, one inch by two inches and half an inch thick.

"Most of the time, problems don't happen in a blink of an eye," Kalantari said. "They start with something small and the problem gradually gets worse."

That's clearly what happened with the Mississippi River bridge, which was built beginning in 1964 to contemporary safety standards, and carried traffic for 40 years before its collapse.

For instance, bridges are built with bearings that respond with the daily expansion and contraction caused by temperature change.  If the bearings don't respond correctly, excessive force could damage the bridge's piers, which could then freeze in place, building stress.

His sensors would notice that and the computers would warn engineers.

Kalanari is testing his system in a bridge along the Capitol Beltway that circles Washington, D.C. He has formed a company, Rensensys, to sell his system.

Engineering research professor Chung Fu, working with the federal government and North Carolina State University, is also developing a smart bridge, in which the sensors also could be built into the bridge during construction.

"The sensors would be embedded, attached to the steel," Fu said.

Among other things, Fu's sensors would listen to the sounds the bridge makes, including the snap when a cable breaks. There also are ultrasonic wave signatures that could give clues that the structure of the bridge was changing.

Both researchers said what to monitor varies from bridge to bridge. In the case of bridges already standing, the history of the bridge could determine which sensors to employ.

Part of the challenge, Fu said, was writing the software that analyzes the data collected by the sensors. The volume could be huge and the software will have to determine when something happens that needs to be passed on to the highway engineers.

Both researchers agree that the sensors would not replace human engineers inspecting the bridges periodically but serve as a sentry between inspections.

"The idea of having the sensors in there so you don't have to make a trip out to the bridge every week to see if there is any deterioration is a really good idea," said Henry Jasny, vice president of the Advocates for Highway and Auto Safety in Washington.

That is particularly true, Jasny said, in an era of budget cuts, where the money many not exist to inspect the bridges properly.

Both researchers believe that had the I-35W bridge been electronically monitored, engineers, warned the bridge was failing, could have shut it down and ordered repairs.