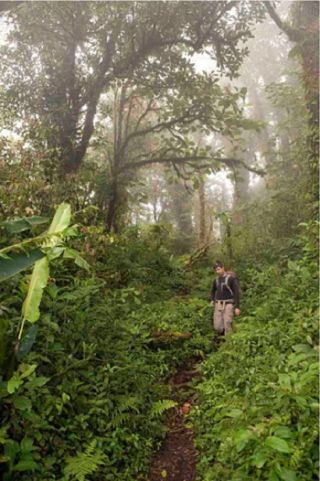 When roots just aren't getting the job done, leaves on some thirsty tropical trees can suck up water from low-hanging clouds, new research shows.

"The textbooks teach us that water enters roots, moves up the trunk and into the branches, then finally exits the leaves," graduate student Greg Goldsmith, a University of California, Berkeley said in a statement. "That's true, but it's not the whole story."

Goldsmith and his colleagues set up plastic moisture-detecting "leaves" to study the patterns of leaf wetness caused by the constant cloud-cover in the tropical forests of Monteverde, Costa Rica. They also installed tiny sensors on the branches of the cloud forest plants to see whether or not water was entering leaves when they were wet.

"With our sensors, we observed water entering the leaves and actually moving back down the branches toward the trunk," Goldsmith said, adding that the mechanism likely helps the trees hydrate when there's not much rain.

"Many cloud forests experience an annual dry season when the primary water source isn't rain, but rather, the moisture from the clouds," he said. "This is when the trees are most likely to draw water in through their leaves."

Goldsmith is in the lab of Todd Dawson, senior author of the study, who demonstrated a similar phenomenon in California redwoods.

The new research was detailed online last week in the journal Ecology Letters.