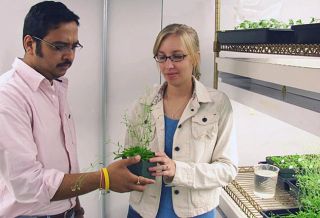 Plants can't see or hear, but they can recognize their siblings, and now researchers have found out how: They use chemical signals secreted from their roots, according to a new study.

Back in 2007, Canadian researchers discovered that a common seashore plant, called a sea rocket, can recognize its siblings – plants grown from seeds from the same plant, or mother. They saw that when siblings are grown next to each other in the soil, they "play nice" and don't send out more roots to compete with one another.

But as soon as one of the plants is thrown in with strangers, it begins competing with them by rapidly growing more roots to take up the water and mineral nutrients in the soil.

Researchers from the University of Delaware wanted to find out how the plants were able to identify their kin.

"Plants have no visible sensory markers, and they can't run away from where they are planted," Harsh Bais, assistant professor of plant and soil sciences at the University of Delaware, said in a statement. "It then becomes a search for more complex patterns of recognition."

Bais and doctoral student Meredith Biedrzycki set up a study with wild populations of Arabidopsis thaliana, a small flowering plant that is often used as a model organism in plant research.

They wanted to use wild populations instead of laboratory-bred species, because the latter "always has cousins floating around in the lab," Bais said.

In a series of experiments, young seedlings were exposed to liquid containing the root secretions, called "exudates," from siblings, from strangers (non-siblings), or only their own exudates.

The length of the longest lateral root and of the hypocotyl, the first leaf-like structure that forms on the plant, were measured. A lateral root is a root that extends horizontally outward from the primary root, which grows downward.

Plants exposed to strangers had greater lateral root formation than the plants that were exposed to siblings.

Further, when sibling plants grow next to each other, their leaves will often touch and intertwine, while stranger plants near each other grow rigidly upright and avoid touching, the authors say.{{ video="LS_091015_plant-siblings" title="Plants Know Their Siblings" caption="Plants use chemical cues to recognize and cooperate with siblings, while spurring competition among rivals. Credit: University of Delaware." }}

In future studies, Bais hopes to examine questions such as: How might sibling plants grown in large monocultures, like corn, be affected? Are they more susceptible to pathogens? And how do they survive without competing?

"It's possible that when kin are grown together, they may balance their nutrient uptake and not be greedy," Bais speculates.

The research also may have implications for the home gardener.

"Often we'll put plants in the ground next to each other and when they don't do well, we blame the local garden center where we bought them, or we attribute their failure to a pathogen," Bais said. "But maybe there's more to it than that."

The study, funded in part by the National Science Foundation, will be published in the January/February 2010 issue of the journal Communicative & Integrative Biology.