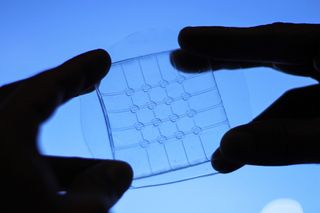 A close-up of the transparent touchpad before it is filled with gel electrodes.
(Image: © University of British Columbia)

A new transparent, flexible touchpad can sense the touch of a finger even when the material is stretched or bent, which could help engineers one day create advanced wearable touch screens, according to a new study.

Increasingly, researchers around the world are developing flexible electronics, such as display screens, cameras, batteries and solar panels. These devices could one day be woven into clothing, prosthetic limbs or even human bodies, the researchers said.

Previously, scientists developed flexible touch screens based on materials such as carbon nanotubes and silver nanowires that are only nanometers — billionths of a meter — wide. However, these devices typically struggled to operate well when they were stretched, which included the material's inability to distinguish between a touch from a finger and a stretch of the fabric itself. [Body Bioelectronics: 5 Technologies that Could Flex with You]

Now researchers have developed a new, flexible touchpad that can tell the difference between a touch and a stretch. Moreover, the device is also transparent, which suggests that it could get combined with a flexible display to create a flexible touch screen.

"This is the first time anyone has made a transparent, touch-sensitive electronic device that can detect touch while the device is being bent or stretched," said study senior author John Madden, an electrical engineer at the University of British Columbia in Vancouver, Canada.

The new device is made with a hydrogel, which is structurally similar to the materials from which soft contact lenses are made. "Often when people think of gels, they think they're soft and weak, like Jell-O, which is purposefully weak so you can chew it," Madden told Live Science. "But people have developed these extremely tough gels to replace cartilage, and some of these can stretch by a factor of 20 or more."

The scientists embedded the hydrogel in silicone rubber. They created a square transparent touchpad about 1.2 inches (3 centimeters) wide, with 16 buttons that are each about 0.2 inches (5 millimeters) wide.

The array retained its sensing abilities even when it was bent or stretched, and it could withstand such common environmental contaminants as coffee spills, according to the study. The transparent pad could also detect multiple fingers simultaneously, which is necessary for a typical zoom function on a smartphone, the researchers said.

The researchers note that the materials used to make their devices cost about $1 per 10.75 square feet (1 square meter) and are cheap to manufacture.

"You can put these on pretty much anything," Madden said. "It opens up the opportunity to make wearable devices, or some sort of robotic skin, or putting it under a carpet to detect someone elderly falling."

In the future, researchers can experiment with making touchpads that are more durable and stretchable, Madden said. The scientists detailed their findings online today (March 15) in the journal Science Advances.