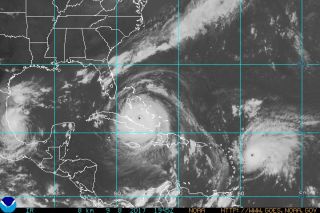 From left to right: Hurricanes Katia, Irma and Jose on Sept. 8, 2017, taken with the GOES-East satellite.
(Image: © NOAA)

With three ferocious storms brewing in the Atlantic, today (Sept. 8) has earned a dubious honor: the worst hurricane day on record.

"It's not official, but today will be the highest daily ACE that the Atlantic has recorded," said Phil Klotzbach, an atmospheric scientist at Colorado State University. The day owes its fame to Hurricane Irma, Jose and Katia, which are simultaneously menacing Florida, the Caribbean and the Gulf of Mexico, respectively. Both Hurricane Irma and Hurricane Jose are currently Category 4 major hurricanes, while Hurricane Katia is a Category 2 hurricane.

The records used to calculate the ACE go back as far as 1851, Klotzbach said.

According to this calculation, then, the combined wallop of hurricane activity today is the highest ever recorded. Of course, records get fuzzier the further back in time people go. In the 1800s, wind speeds were recorded by ships circling the Atlantic; in the 1950s and 1960s, planes may have done reconnaissance on weather systems maybe once a day. Nowadays, there may be two or three hurricane hunter planes monitoring hurricanes at any given time, meaning the level of resolution on wind speeds has gotten increasingly better, Klotzbach told Live Science.

This isn't the only first for the day: Today is the first time that the Atlantic has recorded two hurricanes (Irma and Jose) with maximum sustained wind speeds as high as 150 mph (241 km/h), Klotzbach said.

Either way, all the stats are just a handy way of quantifying what everyone can see for themselves: The monster storms in the Atlantic are really, really powerful, with the potential to do catastrophic damage.

"This is going to be really, really bad in a couple days," Klotzbach said.