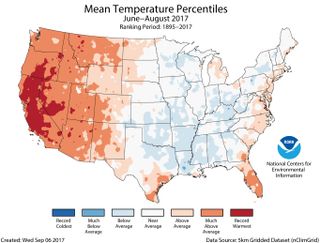 Though temperatures in Midwestern states were cooler than usual in August, the summer was warmer on average in the contiguous U.S.
(Image: © NCEI/NOAA)

It's been a wet, hot American summer, according to a new climate report released yesterday (Sept. 7).

From June through August, average temperatures across the United States were warmer than usual, and overall, the country received more rainfall than is typical — particularly in Texas and Louisiana, which experienced historic amounts of rainfall during Hurricane Harvey, according to the report, issued by the National Centers for Environmental Information (NCEI), part of the National Oceanic and Atmospheric Administration (NOAA).

During the summer months, the national average temperature for the contiguous United States was 72.7 degrees Fahrenheit (22.6 degrees Celsius), making it the 15th warmest summer in 123 years of record keeping. And with a seasonal precipitation average of 9.19 inches (23.34 centimeters), the summer of 2017 was also the 16th wettest on record, according to the NCEI. [10 Surprising Ways Weather Has Changed History]

During August, record-breaking warmth in Western states nudged average temperatures in the contiguous U.S. to 72 degrees F (22 degrees C) — 1 degree F (0.6 degrees C) above average. Meanwhile, the amount of rainfall in the United States in August averaged about 3.3 inches (8.5 cm), which is about 0.7 inches (1.8 cm) above the average.

But not every part of the country was feeling the heat. States in the central United States were cooler than usual in August — Missouri, with an average temperature of 72 degrees F (22 degrees C), was 4 degrees F (2.2 degrees C) cooler than is typical, making 2017 the state's seventh-coolest August on record.

However, over on the West Coast, California, Oregon and Washington experienced hotter-than-average temperatures, making this August their warmest on record.

Precipitation averages in August were boosted by Hurricane Harvey, which lingered over Texas and dumped unprecedented quantities of rainfall, topping 40 inches (102 cm) in some areas. An average of 6.6 inches (16.7 cm) of rain fell in Texas, more than 4 inches (10 cm) over the amount that normally falls in August, NCEI officials reported.

Based on averages dating back to January 2017, this has been the wettest year in 123 years of record keeping, and the third warmest, according to the NCEI report. Although August was generally soggier than usual, drought conditions in the country were on the rise. By the month's end, 11.8 percent of the contiguous United States was experiencing drought, up from 5.3 percent in June and affecting more than 26 million people, according to the U.S. Drought Monitor Report.