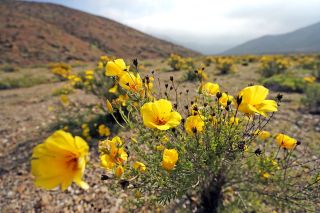 An unexpected rain has caused the world's driest nonpolar desert to burst into bloom.

Chile's Atacama Desert typically gets a mere 0.6 inches (15 millimeters) of rain every year. But unusual rains that fell during the winter in northern Chile led the barren landscape to blossom in August.

Typically, the Atacama becomes an endless field of wildflowers once every five to seven years due to rains from El Niño, a climate cycle in the Pacific Ocean. This rare transformation is known as a "super bloom" and has earned the desert the nickname "desierto florido" ("flowering desert" in Spanish) from locals. [Photos: Colorful Blooms Sprout Across the World's Driest Desert]

The desert holds millions of dormant seeds in its soils. When rain waters these seeds, they can open and take root, eventually growing into flowers that are red, orange, yellow, purple and white.

The last super bloom happened in 2015, and the next one wasn't expected for several more years. But the unexpected rains delivered a rare treat: fragrant flowers ahead of schedule.

The Atacama Desert sits on a 600-mile-long (1,000 kilometers) plateau in northern Chile that borders Peru, Bolivia and Argentina. The harsh, arid land is sparsely populated, but thousands of tourists flock there during super blooms to see the more than 200 floral and wildlife species, Live Science previously reported.