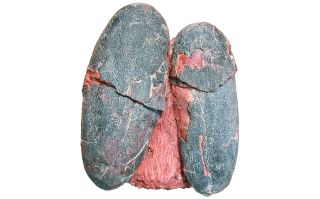 Fossilized eggs belonging to the Cretaceous dinosaur Heyuannia huangi hold traces of pigment hinting that they were a blue-green color. To the naked eye, they appear blackish-brown.
(Image: © Copyright 2017 Wiemann et al.)

A type of bird-like dinosaur that lived in what is now China during the Cretaceous period — about 145.5 million to 65.5 million years ago — laid eggs that had a bluish-green tint, the first evidence of pigment in dinosaur eggs, according to a new study.

The well-preserved eggshells belonged to the oviraptorid Heyuannia huangi, and analysis revealed the hints of blue-green color, the researchers said. Oviraptorids were a small-bodied, short-snouted group of dinosaurs with toothless beaks, and are known from fossils found in Mongolia and China.

Blue and green egg hues are found in eggs belonging to many types of modern birds, and were long thought to have originated in bird lineages. This new finding, however, implies that egg coloration appeared earlier in the dinosaur family tree, and might have emerged alongside nesting behavior that left eggs partially exposed in nest mounds, rather than buried underground, the scientists wrote in the new study. [Image Gallery: Dinosaur Day Care]

Two pigments produce eggshells' colors: biliverdin, which is responsible for blue-green shades, and protoporphyrin, which contributes reddish-browns to the palette, usually appearing as speckles or other patterns. Color in eggs is thought to camouflage them from predators or help birds recognize their own eggs, researchers previously discovered.

The scientists looked at three Late Cretaceous oviraptorid eggs, all of which had "a blackish to blackish-brownish" color with "a very subtle shimmer of blue-green at angled light conditions," the researchers wrote in the study.

Examination of the eggshells revealed the presence of biliverdin and protoporphyrin. However, the amount of biliverdin was significantly higher, suggesting that the eggs were a solid color and did not have reddish-brown patterns, the researchers reported.

Compared with protoporphyrin, biliverdin is more vulnerable to being dissolved by water carried in sediments, and there was likely much more of the pigment in the shells before they fossilized, the researchers explained. After estimating how much pigment may have been lost to time, they determined that the eggs probably would have been an "intensively blue-greenish" color, they wrote in the study.

Biliverdin and protoporphyrin are associated with certain microbial activity, and further testing is required to determine whether their presence in the fossil eggshells is microbial in origin, the study authors wrote. However, the pigments were absent in the sediment surrounding the eggs, which suggests that the color-producing compounds originated in the eggs and were not part of the landscape's mineral or microbial composition, the scientists noted.

In birds, pigmented eggs are typically associated with species that lay eggs in exposed nests but do not brood them continuously. Oviraptorids are known for building aboveground nests with oblong eggs arranged in overlapping circles, and the oblong shapes of the fossil eggs in the study — along with their porosity — told the researchers that these eggs were likely kept in a nest aboveground, thus raising questions about a possible connection between the evolution of egg color and nesting behavior.

"Potential future avenues for investigation are posed by the potential linkage between blue-green egg color and communal nesting," the researchers wrote.

The findings were published online Aug. 29 in the open-access journal PeerJ.