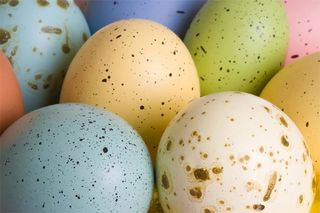 Birds see a more colorful world than we do, especially when it comes to their eggs, a new study suggests.

Unlike humans, birds can see ultraviolet (UV) light, and they have four – rather than three – color receptors in their eyes, allowing them to better distinguish between hues.

Now researchers have shown that while most of the color variation in eggshells can be seen by humans and birds alike, a swath of hues that our eyes miss may play an important role in avian life. For instance, we are oblivious to the UV pigment that may help birds differentiated between their own eggs and those of another species.

Among vertebrates, birds are unique in laying eggs with pigmented shells, though scientists suspect the ancestral egg was white and had none of the speckles now common on birds' eggs.

The researchers also looked at how the background color of eggshells (the color behind the speckles) varies between bird species from different points on their evolutionary family trees, shedding light on what might have driven the variation in color.

The details we miss

The team, led by Phillip Cassey of the University of Birmingham in England, measured the wavelengths of light reflected by 2,190 eggs laid by 251 bird species. The samples came from the Natural History Museum at Tring, United Kingdom. The study focused on background color.

"Most of the variability seems to come in the human visible spectrum," said study researcher Mark Hauber, an animal behaviorist at Hunter College of the City University of New York.

But the most important variation between species occurred in the short wavelength – or ultraviolet – region of the color spectrum.

This may have implications for how birds recognized eggs laid by cuckoos, cow birds and other species who sneak their eggs into nests for other birds to feed at the expense of their own chicks. A Czech study published in 2008 found that Blackcap warblers were significantly more likely to reject other Blackcap eggs after the researchers painted them with an ultraviolet light blocker and put them in nests as a brood parasite would. However, an earlier study found magpies were no more inclined to reject cuckoo eggs coated with a UV blocker.

It is believed that birds use color to recognize or disguise their eggs from predators or to mimic the eggs of other birds. Color, including speckles, may also play a structural role, for instance, acting as sunblock for the developing chick or reinforcing the strength of the eggshell.

The color comes from two pigments: the blue-green biliverdin, and the red-brown protoporphyrin, which are both breakdown products of hemoglobin. This gives rise to one of the mysteries of egg coloration.

"What we don't know is how do these pigments combine, and how do they generate these colors," Hauber said. "You would expect that there are two peaks of color in birds, one is blue and one is reddish, and yet you have these medium wavelengths."

The researchers found this "middle" region of the spectrum actually contains the most variation, even between closely related species, indicating that many species-specific adaptations may involve these colors.

Meanwhile, they found that the reddish hues are more likely to remain conserved or unchanged throughout evolution among less closely related birds, indicating an evolutionary advantage to this pigment.

But, they write, "no single hypothesis is likely to be sufficient to explain the striking variation we observe in eggshell coloration."