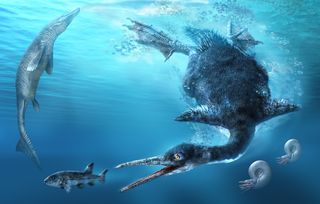 Two brothers in Japan happened upon the fossilized remains of the country's first and oldest fossil of a diving bird. The new species is named Chupkaornis keraorum.
(Image: © Illustration by Masato Hattori)

When two brothers were walking near a reservoir in a small town in northern Japan, one noticed something peculiar in the ground. The brothers collected a few of the intriguing pieces and took them to paleontologists at a nearby university.

The pieces turned out to be fossils of the oldest bird ever found in Japan: an ancient, toothed, diving bird whose species had never been identified by science.

The new species, named Chupkaornis keraorum, belonged to a group of ancient birds, hesperorinthiforms, that were flightless, expert water divers during the Cretaceous.[Avian Ancestors: Dinosaurs That Learned to Fly (Gallery)]

Chupkaornis,scientists estimate, lived between 90 million and 84 million years ago, when dinosaurs roamed the Earth. It is the "best-preserved" specimen of this kind of bird from Asia, and the first hesperorinthiform found from the eastern part of the Eurasian continent, according to astudy published Tuesday (Aug. 8) in the Journal of Systematic Palaeontology.

"There has never been a bird likethis found in Japan before. It's exciting any time you can put a new dot on themap," Anthony Fiorillo, curator and vice president of research and collections at the Perot Museum of Nature and Science in Dallas, told Live Science. "It's really helping us understand the global distribution of a widespread group of birds. And it helps us understand their early evolution."

Fiorillo, who was a co-author of the study, told Live Science that the bird was the size of a "good-sized duck" and gobbled up fish, which it dove for and captured using its sharp teeth. The bird's fossil featured powerful hind limbs and somewhat skimpy forelimbs, suggesting that the bird was made for the water and spent minimal time on shore laying eggs.

"Their strong suit was swimming and diving, not walking, so if one was unfortunate enough to be too far from water when a theropod wandered by, it could very well have become dinosaur food," Fiorillo said.

Scientists have known about hesperorinthiforms since the late 19th century, when a Yale University paleontologist came across the remains of one of the birds in Kansas (an inland sea covered middle America during the Cretaceous). Since then, several specimens of the ancient diving bird have been found in the Northern Hemisphere, particularly in North America, but rarely in Asia.

The discovery of Chupkaornis, the oldest known Asian hesperornithiform, suggests that these birds dispersed to the eastern edgesof Asia no later than 90 million to 84 million years ago, the researchers said.

"This study provides [a] better understanding in[to] the early evolution of this group and the origin of diving in birds," lead author Tomonori Tanaka, said in a statement. Tanaka is a doctoral student in the Department of Natural History Sciences at Japan's Hokkaido University. [Photos: Mummified Bird Wings Preserved in Amber]

The specimen, which was found in 1996, consists of nine fossilized remains, including vertebrae and femur fragments. An earlier abstract, published in 2000 in Japanese, described the fossil but had not dated it as precisely. Chupkaornis keraorumis named after its unique location and its discoverers. "Chupka" is the word used by indigenous people from Hokkaido for "eastern,"and "keraorum" is named after Masatoshi and Yasuji Kera, who foundthe specimenduring their walk.

Fiorillo pointed out that big paleontological discoveries are often made by everyday people who bring specimens to local universities or museums. He said that one of the most significant fossils in the Perot Museum was found by a "regular" guy who liked to explore an old riverbed near Lake Grapevine, in Texas. That fossil turned out to represent Flexomornis howei and is among the oldest known fossilized bird remains in North America.

"There's a lot of rock on this planet, and there really aren't that many paleontologists. But there are a lot of curious people around," Fiorillo said. "And no matter what country you're in, people are curious about where they live."

Chupkaornis keraorumis currently held in a collection of the Mikasa City Museum in Hokkaido, Japan.