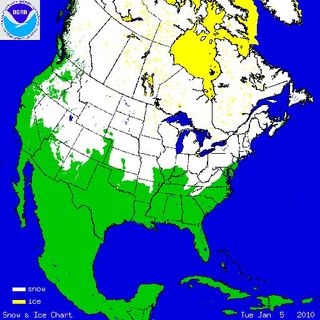 If this winter's record-breaking snowfalls and bitter cold remind you of your childhood, perhaps you grew up when disco was alive and well.

"People who were around in the late '70s remember several winters similar to this," said Deke Arndt, who was a child of the 70s and now makes his living by monitoring climate data for the National Climatic Data Center (NCDC).

For those who don't recall those years, this winter may seem unprecedented. It's not.

"This is unusual, significant, and certainly a real pain, but it's not unprecedented," said Arndt, speaking of the snow and cold across the nation so far this winter.

One significant modern record did fall, in December: The average extent of snowfall cover for North America — the footprint of snow — was the largest ever seen, Arndt told LiveScience. However, that measurement dates back just 40 years, to the advent of satellite observations.

Otherwise, while many daily records have been set for specific locations, not much is totally off the charts this year, and what may seem extreme is actually part of Mother Nature's normal long-term climate variations. Meteorologists also are quick to point out that reliable U.S. weather data goes back only to the late 1800s, so it's normal for records of various types to be broken every year, somewhere, when dealing with such a relatively brief data set.

Yes, however, it's cold, and that cold is very persistent.

In Tampa, Fla., this week, daily highs have been below the normal daily low temperatures. Thursday will likely be the fifth day in a row with the low temperature dipping below 40 degrees Fahrenheit (4 degrees Celsius). But the record consecutive string of such cold days was eight, set in 1980, according to the National Weather Service.

Florida's chill is of course nothing compared to Chicago, where the thermometer has not gotten above freezing since Christmas Day.

And yes, it's been snowy.

Buffalo, NY has seen snow 11 of the past 12 days, according to Weather.com, and Cleveland has had 10 straight days with at least some snow. Yet while this winter has brought big storms, in New York City nothing has matched the 25.5 inches of snow that fell on Dec. 26, 1947, nor has Boston seen anything like the 23.6-inch event of Feb. 17, 2003.

To warm the hearts of those who feel freezing or snowed in, here are some all-time extremes in the lower-48 United States to put things in perspective, courtesy of Jeff Robel at the NCDC:

Here are some serious records for all of North America:

The winter weather is far from over.

Forecasters predict more snow for the Northeast, and possibly blizzard conditions in the Plains and upper parts of the Mississippi Valley into Thursday. A crop-damaging freeze is expected for the Southeast this weekend, where sustained below-freezing temperatures could wipe out billions of dollars in produce.

"Temperatures could drop into the teens and lower 20s for a number of hours in southern Louisiana," said Accuweather forecaster Alex Sosnowski.