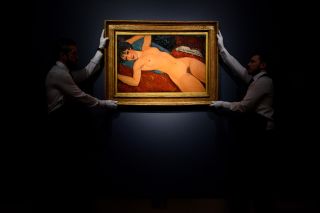 An art exhibit in Genoa, Italy, featuring the works of modern painter Amedeo Clemente Modigliani, recently closed three days ahead of schedule, after suspicions arose that many of the paintings were likely forgeries.

The exhibition, "Modigliani: Selected Works," opened at the Palazzo Ducale on March 16. It featured about 30 paintings by Modigliani, and "many drawings," and was scheduled to run through July 16, according to the exhibition website.

But the exhibit's sponsors shuttered the exhibit on the evening of July 13 in order to assist an investigation of claims that 21 of the exhibit's 50 artworks — on loan from private collectors in Europe and the United States, and from museums in the U.S., Italy, France and Belgium — were fakes, exhibit representatives said in a statement. [9 Famous Art Forgers]

Officials confiscated the contested works after Italian art critic Carlo Pepi filed a complaint with the Carabinieri Headquarters for the Protection of Cultural Heritage (TPC), also known as the "art police," The Telegraph reported on July 14. This highly specialized police force handles criminal activity related to fine art and antiquities, according to a description on the TPC website.

Pepi began raising alarms about the paintings in May, claiming that at least 13 of them were fakes, representatives of Authentication in Art (AiA), a nonprofit organization of art world professionals, said in a statement.

Modigliani, who died in poverty in 1920 at age 35, was known for painting portraits and sensual nudes in a unique avant-garde style that typically featured elongated heads and necks. He became a popular target for contemporary forgers after his death, when his paintings began selling for record sums. Counterfeiters quickly realized that they could take advantage of Modigliani's abysmal record-keeping — he gave many drawings away and poorly documented what he sold, creating enormous challenges for art experts attempting to certify his works, according to the AiA statement.

But to a skilled forger, any 19th- or 20th-century artist is vulnerable — far more so than painters from earlier centuries. That's because, in part, it's easier to find or replicate materials that closely mimic supplies that the artist may have used, so the forgeries can escape detection through forensic testing, art historian and professor Noah Charney, author of "The Art of Forgery: The Minds, Motives and Methods of Master Forgers" (Phaidon Press, 2015), told Live Science in an email.

Lithographs, in particular, are a preferred medium for forgers, "since a quality laser print looks pretty much identical [to a lithograph], and you can buy authentic-aged paper on which to print them," Charney said.

"You've got to be careful with mid-20th-century lithographs, by the likes of Miro, Chagall, Picasso, Dali. There are many more forgeries of such lithographs out there than originals, I'm told," he said.

The quality and intricacy of an artist's technique can also determine whether they might be a likely target for counterfeiters, security expert Anthony Amore, author of "The Art of the Con: The Most Notorious Fakes, Frauds, and Forgeries in the Art World" (St. Martin's Press, 2015), told Live Science in an email.

"It is much more difficult to re-create the hand skills of a Rembrandt or Vermeer or Velazquez than the splatter of Jackson Pollock," Amore said.

"Pollock is often forged, as are his abstract expressionist colleagues. The same is true of impressionists," he said.

But perhaps the most important ingredient for pulling off a successful art forgery is simply having a credible story describing where the artwork came from, Charney told Live Science.

"It is the story that accompanies them — what I call the 'provenance trap' — that really passes off the pieces," Charney said. "This is the invented backstory, accompanied by normally forged archival documents suggesting that the work has existed, and been considered authentic, for a long time."

A well-crafted "provenance trap" could explain how even seasoned art experts are tricked by forgeries — such as the alleged Modigliani fakes. If a painting looks authentic, has paperwork that appears to be in order, and comes with an origin story that seems plausible, those who are examining the forgeries can easily be swept up in the excitement of possessing a fine art masterwork — even forgoing forensic testing, Charney said.

"The most common reason that forgeries escape curatorial detection is a combination of the con man's brazen yet convincing backstory combined with the curator or buyer's desire to believe that they have their hands on something very special," Amore added.

The total number of bogus paintings in the ill-fated Modigliani exhibit is yet to be confirmed by authorities, but for now, the suspected imitations will remain in the hands of the Prosecutor's Office of Genoa, Palazzo Ducale representatives said in the statement.