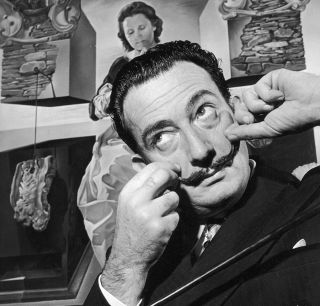 Salvador Dali (1904—1989) in London with one of his paintings in December 1951.
(Image: © George Konig/Keystone Features/Getty Images)

The strange story of Salvador Dalí's exhumation got even stranger last week, as forensic examiners announced that the famous artist's mustache is still intact, 28 years after his death.

Dalí's embalmer called the discovery of the mustache "a miracle," according to The New York Times.

The surrealist artist was known for his impeccably waxed mustache, which he styled into two thin, upward-pointing curves. The Salvador Dalí Museum in St. Petersburg, Florida, even sells shirts and socks emblazoned with the iconic facial hair. Lluís Peñuelas, the secretary general of the Dalí Foundation, which oversees the artist's estate, said the discovery of the mustache was a "very emotional moment," The New York Times reported.

As emotional as the discovery may have been, it isn't very surprising — at least from a biological perspective. Keratin, the protein that makes up nails and hair, resists decomposition, and both hair and nails can persist in graves for years.

Dalí's body was exhumed July 20 as part of a paternity case. The artist, born in 1904, never had children with his wife, Gala Dalí. But 61-year-old tarot card reader Pilar Abel of Spain has claimed that she is the artist's daughter, conceived, she says, during a summer affair in the village of Port Lligat, Spain, where Dalí had a home and Abel's mother worked as a nanny for nearby families. The Dalí Foundation has said Abel's claims are without merit, but a judge ordered DNA testing on Dalí's body last month, leading to the exhumation. [Bones with Names: Long-Dead Bodies Archaeologists Have Identified]

The results of the paternity testing are expected in a few weeks, according to The New York Times. Forensic experts will extract DNA samples from Dalí's teeth, hair roots and nails, along with two bones of the arms or legs.

Hair and nails can stick around for a long time after death. Both are made of keratin, a protein bound together by tight chemical bonds, particularly disulfide bonds, which are strong enough to fend off many of the enzymes that easily degrade other body tissues. Keratin is also insoluble in water, meaning it won't dissolve if the body comes in contact with rainwater or groundwater. A few microbes produce keratinases, enzymes that specifically degrade keratin; these enzymes are important in the leather industry, because it is so hard to remove hair from animal skin without them, according to a 2006 paper in the journal Applied Microbiology and Biotechnology.

The speed at which hair does degrade after death depends on the presence of keratinase-producing microbes and other environmental conditions. In dry conditions, hair can remain intact for hundreds, even thousands of years — the oldest hair ever discovered on a body was found attached to a 9,000-year-old mummy from Chile. In 2009, researchers reported that they'd discovered what might be the 200,000-year-old hair of a human ancestor inside the fossilized remains of hyena dung. Hair from Peruvian mummies has even been used to reveal the diets of people who lived 2,000 years ago.

Hair is regularly discovered on Egyptian mummies. Many had their hair styled during the mummification process, sometimes with a fat-based "hair gel."

One lone, well-preserved braid found beneath Romsey Abbey in England may belong to someone who died between A.D. 965 and 1045. In the 1800s, Victorian mourners often wove jewelry or wreathes from the hair of deceased love ones; many of these mementos survive today.