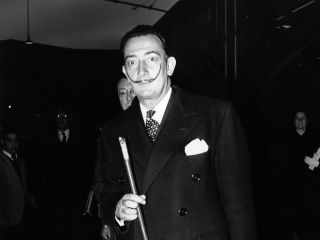 Salvador Dalí's remains are set to be exhumed in order to collect DNA samples for a paternity claim against the artist's estate.
(Image: © Barham/Getty)

In a surreal development almost worthy of one of his paintings, Salvador Dalí's grave is scheduled to be opened tomorrow (July 20) in an effort to collect DNA samples that could settle a paternity claim against the artist's estate.

The paternity suit has been brought by Pilar Abel, a tarot card reader and fortune teller who has claimed for many years to be the illegitimate daughter of Dalí, who died in 1989. Abel, who is well-known in Spain as a television psychic, claims that her grandmother said Abel's mother had an affair with the artist before the fortune teller's birth.

The French news agency AFP reported that a judge in a court in Madrid ordered Dalí's remains to be exhumed after previous tests failed to provide a viable sample of the artist's DNA. These tests were done on fragments of the artist's skin and hair that were taken from his death mask. [Genetics by the Numbers: 10 Tantalizing Tales]

A spokesperson for the Dalí estate told AFP that the exhumation was scheduled to proceed on July 20, but an appeal is being filed against the court's decision.

Dalí is buried beneath the floor of the Dalí Theatre-Museum in his hometown of Figueres, in northeastern Spain. If DNA tests prove that Abel is indeed the daughter of Dalí, then under Spanish law she is entitled to inherit a quarter of the artist's considerable fortune in artwork and properties, which was left to the Spanish state in Dalí's will.

Dalí was married, but he had no children from the marriage, and his sexuality has been the subject of much speculation, reported The Guardian.

Obtaining a viable DNA sample from Dalí's 28-year-old remains will be a challenge, but not impossible, said Victoria Moore, the commercial DNA services manager for LGC, the United Kingdom's leading life sciences testing and forensics company.

"There is always the possibility that you might not get a lot of DNA," Moore told Live Science, "but I would expect them to get something — it's not yet 30 years old, so it's not too bad."

Moore noted that scientific researchers have recently been able to extract DNA in mummified soft tissue from an Egyptian mummy that was around 2,000 years old.

But the success of the sampling would depend on how much the DNA in Dalí's body has degraded over time in the specific environmental conditions of his grave, Moore said. [Top 10 Weird Ways We Deal with the Dead]

"Humidity and the environment generally can all have a knock-on [cumulative] effect," she said, "as well as the types of embalming methods that have been done — whatever chemicals have been used in that process may start to destroy whatever DNA is present."

Moore said the best place to look for viable DNA would be in the artist's teeth or bones, rather than in the soft tissues of the body, which degrade more rapidly after a person dies.

Some of Dalí's teeth, however, are likely to be loose in the jaw because the soft tissue has degraded, so it might be possible to remove them without doing too much damage to the remains, Moore said.

A tooth would be ideal for DNA testing because the enamel on the outside acts like a protective layer for the cells and DNA inside, Moore said. "So if you think about it, it's a bit like a time capsule," she said.

She added that the decision on where to extract DNA will be delicate. "He's a very important gentleman, and it's always quite invasive to decide how to take the DNA."

If enough of Dalí's DNA can be recovered during the exhumation, the next stages will be the so-called amplification of the sample so that it can be used to produce a DNA profile of the dead artist, Moore said.

"Because these are older samples, you're not going to get the same volume of DNA that you would get in [a] sample of blood or saliva" from a living patient, she said. "So, we run it through a system called PCR [polymerase chain reaction], an amplification process that is like a cocktail of different chemistries that allows you to create a lot more copies and to start to visualize it."

The final step in analyzing Dalí's DNA will be to compare the artist's DNA profile with that of his alleged daughter, "the sort of test that's done on a day-to-day basis in all paternity labs all over the world," Moore said.

Moore and other scientists at LGC are using similar techniques in a major effort to identify the remains of around 3,000 Australian and British soldiers who were buried in mass graves after the Battle of Fromelles in northern France in 1916.

In 2009, forensic specialists from LGC and the non-profit group Oxford Archeology carefully excavated the mass graves at Fromelles and took samples of tissue, bones and teeth for later DNA testing.

Moore and her colleagues at LGC are now compiling a database of the DNA profiles of thousands of living relatives of the soldiers killed at Fromelles, so these profiles can be compared against those of each set of remains from the mass graves.

The remains were individually reburied in a new military cemetery at the battle site in 2010.