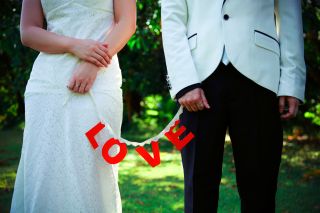 Going on a first date? The chance that it leads to wedding bells may depend, in part, on how similar his or her DNA is to yours.

New research finds that people tend to pick spouses whose genetic profile shares similarities with their own. The effect is subtle (other similarities, such as similarity in education, have a larger influence), but it's important to understand that mating isn't truly genetically random, researchers report today (May 19) in the journal Proceedings of the National Academy of Sciences.

The genetic effect might even signal or contribute to social inequality, they write. The current U.S. social system might inadvertently sort people by genetics, for example, or contribute to schisms seen at the level of our very DNA.

When it comes to marriage, the adage "birds of a feather flock together" is more on-point than the idea that opposites attract. Many studies have found that people tend to marry others who are similar to them in education, social class, race and even body weight. The phenomenon is called assortative mating. [I Don't: 5 Myths About Marriage]

The question, according to study leader and University of Colorado research associate Benjamin Domingue, was whether these assortative mating differences are visible at the genetic level.

The researcher analyzed genetic data from 825 non-Hispanic white Americans who participated in the U.S. Health and Retirement Study. They compared the similarity of the DNA of married couples with the similarity of random, non-coupled individuals.

The results, mirrored in a follow-up study with data from the long-running Framingham Heart Study, revealed that married people have more similar DNA segments than random pairs of people.

But genes play a role in many of the traits that people use to sort themselves into pairs, including geographical origin, intelligence and more. The researchers attempted to account for these factors by controlling for geography, after which the genetic results still remained. They also examined the findings in the context of educational attainment, which is partly determined by intelligence.

They found that after controlling for educational attainment, the genetic effect declined by 42 percent. In general, the assortative effect of education was three times stronger than sorting based on genes, the study found.

The genetic effect on educational attainment played a small role: The research team found that no more than 10 percent of the variation in similarities in education had to do with similarities in genetics in a married pair.

The results were limited to opposite-sex, non-Hispanic white couples, and the study represents only a "first step" in teasing out the genetics behind mate-choosing, the researchers wrote. Questions remain, such as whether people's genes help shunt them into environments — college, for example, or trade school — where they happen to mix and mingle with others of similar genetics, which could explain much of the effect.

It's important to understand how genetic similarity influences mating, because researchers studying genes and evolution can't assume that genes mix randomly. Geneticists usually try to estimate this nonrandom mating by comparing parental traits, but that is a very rough method, the researchers wrote.

"[O]f even greater value would be understanding the quantity of nonrandom mating that there is genetically with respect to the trait and how these associations have changed over time," the researchers wrote.