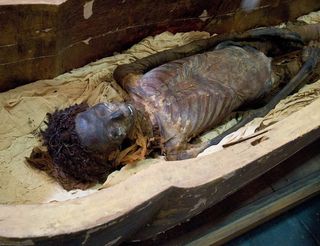 Egyptians keep their hair looking good in the afterlife with a type of fat-based hair gel, new research shows. The mummy Maiherpri, shown here, was alive during the 18th dynasty, slightly older than the mummies sampled in the study.
(Image: © Dr. Michael Miyamoto)

Ancient Egyptians might have been just as vain as humans today. They seem to have styled their hair with fat-based products to enhance their appearance and accentuate their individuality, new research suggests.

"Personal appearance was important to the ancient Egyptians so much so that in cases where the hair was styled, the embalming process was adapted to preserve the hairstyle," the researchers, based at the University of Manchester in the United Kingdom, write Aug. 16 in the Journal of Archaeological Science. "This further ensured that the deceased's individuality was retained in death, as it had been in life, and emphasizes the importance of the hair in ancient Egyptian society."

and three from museum samples of unknown origin) who lived around 300 B.C. in ancient Egypt. By taking a close look at the hairs under a microscope, the researchers noticed that nine of these mummies had an unknown substance coating their hair. [Top 10 Weird Ways We Deal With the Dead ]

Chemical analyses of the coating revealed it was made up of fatty acids from both plant and animal origins.

The researchers believe that this fat-based hair gel was used by the Egyptians to mold and hold the hair in position to enhance appearance, since some of the deceased that had been mummified naturally in the desert also had fats in their hair. When mummified using embalming chemicals, the undertakers seem to have taken special care to retain the deceased's hairdos, as they used different chemicals on different parts of the body.

"It is evident that different materials were used for different areas of the body," the researchers write. "The hair samples from the Dakhleh Oasis were not coated with resin/bitumen-based embalming materials, but were coated with a fat-based substance."

The mummies had all different kinds of hairstyles depending on age, sex and presumed social status. Researchers have previously discovered objects in Egyptian tombs that seem to be curing tongs, so they might have been used in conjunction with the hair product to curl the hair into place, the researchers speculate.