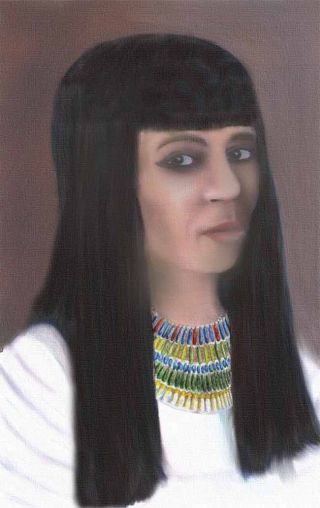 The face of a long-dead mummy has been brought back to life through forensic science.

Based on CT-scans of the skull of the ancient Egyptian mummy Meresamun, two artists independently reconstructed her appearance and arrived at similar images of the woman.

Meresamun, a temple singer in Thebes (ancient Luxor) at about 800 B.C., died of unknown causes at about age 30. Until recently, modern viewers of the University of Chicago-owned mummy have had to guess about the woman behind the mask.

Now scientists think they have a pretty good idea of what she looked like.

Researchers created a 3-D digital model of Meresamun's skull through multiple detailed CT-scans. Then the data was handed over to two forensic artists to extrapolate the woman's facial features.

Chicago artist Joshua Harker used the Gatliff-Snow American Tissue Depth Marker Method to calculate the contours of the face and produce a digital reconstruction. This technique is considered accurate enough that its results are admissible in court to identify victims.

"The skull is the driving architecture of the face — all the proportions and placements are there, if you know how to read it," Harker said. "Even the shapes of the lips, nose and eyebrows can be determined if you know what to look for."

A more traditional police sketch was made by Michael Brassell, an artist who works on cold case investigations with the Maryland Department of Justice and the State Police Missing Persons Unit. Brassell also used the CT-scan model to estimate the shape of Meresamun's face.

"The project was no different than any of the postmortem drawings I have worked on for cold case homicides," Brassell said. "The CT scans were very clear, making my job easy. If this was a homicide case, I would almost go as far to guarantee a hit on the profile drawing."

The woman inside the mummy was apparently tall for the time, with wide-spaced eyes and an overbite.

"Meresamun was, until the time of her death at about 30, a very healthy woman," said Michael Vannier, a University of Chicago radiologist who made the CT-scans. "The lack of arrest lines on her bones indicates good nutrition through her lifetime and her well-mineralized bones suggest that she lived an active lifestyle."

The reconstructed images of Meresamun's face are on display, along with her mummy and coffin, at the University of Chicago's Oriental Institute Museum through Dec. 6.