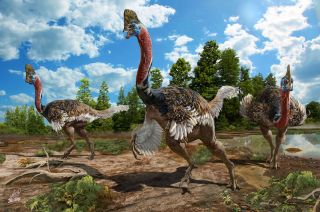 A Chinese farmer has discovered the remains of a dinosaur that could have passed for the ostrich-like cassowary in its day, sporting the flightless bird's head crest and long thunder thighs, indicating it could run quickly, just like its modern-day lookalike, a new study finds.

The newfound dinosaur's 6-inch-tall (15 centimeters) head crest is uncannily similar to the cassowary's headpiece, known as a casque, the researchers said. In fact, the crests have such similar shapes, the cassowary's may provide clues about how the dinosaur used its crest more than 66 million years ago, they said.

The findings suggest that the dinosaur, which would have towered at 5.5 feet (1.6 meters), may have had a similar lifestyle to the modern cassowary bird (Casuarius unappendiculatus), which is native to Australia and New Guinea, the study's lead researcher, Junchang Lü, a professor at the Institute of Geology, Chinese Academy of Geological Sciences, told Live Science in an email. [Photos: Fossilized Dino Embryo Is New Oviraptorosaur Species]

Researchers found the oviraptorid — a type of giant, bird-like dinosaur — in Ganzhou, a city in southern China, in 2013. The specimen was in remarkable shape: The paleontologists found an almost complete skeleton, including the skull and lower jaw, which helped them estimate that the creature was likely a young adult, or at least 8 years of age, when it died.

The long-necked and crested dinosaur lived from about 100 million to 66 million years ago during the late Cretaceous period, and likely used its clawed hands to hunt lizards and other small dinosaurs, Lü added.

The research team named the unique beast Corythoraptor jacobsi. Its genus name refers to the raptor's cassowary-like crest, and the species name honors Louis Jacobs, a vertebrate paleontologist at Southern Methodist University who mentored three of the study's researchers.

The researchers think the crest likely served the dinosaur in different ways, they said, including in display, communication and perhaps even as an indication of the dinosaur's fitness during the mating season.

The investigation sheds light on this extraordinary new species, said Darla Zelenitsky, an assistant professor of paleontology at the University of Calgary in Alberta, Canada, who was not involved with the study.

"It is nice to see that detailed comparisons with a modern species was done in this study in order to help understand the role or function of such a crest in an extinct species," Zelenitsky told Live Science in an email.

C. jacobsi isn't the only oviraptorid with a head crest: Others in the oviraptorosaur group are known to sport this type of head crest, she said. In addition, some non-avian dinosaurs, including the duck-billed dinosaurs, had crests atop their heads, but "the duckbill's crest differs in form and structure from the more cassowary-like crest of Corythoraptor and other oviraptorosaurs," Zelenitsky said.

The specimen is now housed at the Jinzhou Paleontological Museum in China's Liaoning province. The study was published online today (July 27) in the journal Scientific Reports.