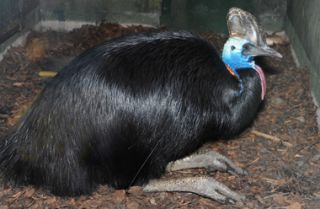 Secret cameras captured rare footage of a southern cassowary laying eggs at the Edinburgh Zoo for the first time in 27 years.

Cassowaries are flightless birds, related to emus and ostriches, with a bristly black plumage, bright blue face and horn-like helmet. They are notoriously aggressive, solitary in the wild and can be found in New Guinea and northeastern Australia.

In 1986, the Edinburgh Zoo was the first organization to successfully breed southern cassowaries in the United Kingdom, but it hasn't welcomed any chicks since.

The exciting egg-laying, caught on video, is not only the result of a long captive breeding effort, but also a long courtship. This spring marked the fist time the zoo's 10-year-old female cassowary Sydney allowed her male companion Billy to share her enclosure since he arrived in 2005, zoo officials said.

"Billy and Sydney showed their tender side and were often spotted eating from the same bunch of grapes," read a statement from the zoo. "A nest site was constructed for the lovebirds and they both showed interest in the area before the first egg was laid last month."

Male cassowaries take on egg incubating responsibilities so Billy has been keeping the six eggs warm. Cassowary eggs have a thick green shell and are among the largest bird eggs, typically measuring about 6 inches (15 cm) long and 4 inches (10 cm) wide. But zoo officials will have to wait several weeks to find out if any viable chicks are inside.

"Their incubation period is around 56 days, so we will just have to wait and see if any hatch out," Colin Oulton, of the zoo's bird section, said in a statement. "As this is Billy's first clutch we want to assess his natural parenting skills, so plan to let him incubate naturally, rather than remove the eggs to an incubator."

There are thought to be between 10,000 and 20,000 southern cassowaries left in the wild and their populations are threatened by habitat loss, hunting and predation by dogs. They are listed as a "vulnerable" species on the International Union for Conservation of Nature (IUCN) Red List.