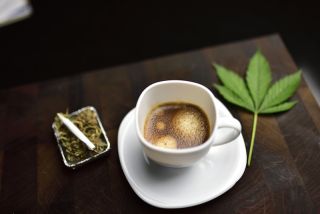 Eighty percent of Americans get a daily jolt from caffeine, and now, as marijuana legalization has spread across the nation, some users and businesses have begun touting a combination of the two drugs.

"After years of smoking, I've found that caffeine and weed are a perfect mix. If I get nicely stoned then drink a strong cup of coffee, the effects mix so perfectly," wrote one Reddit user.

A company called Cannabiniers recently tapped into the trend with the launch of Brewbudz, which are cannabis-infused coffee, tea and cocoa pods that pop into any Keurig coffee brewer. [25 Odd Facts About Marijuana]

But what happens when you combine the drugs, and are there possible dangers?

It's important to keep in mind that the caffeine in a regular cup of coffee or tea is a pretty powerful psychoactive drug, meaning it’s capable of affecting the mind, emotions and behavior, Dr. Sergi Ferre, a senior investigator at the National Institute on Drug Abuse (NIDA), told Live Science.

Caffeine exerts its effects by blocking receptors in the brain for a neurotransmitter called adenosine, Ferre told Live Science. Adenosine is an inhibitory neurotransmitter, meaning that it blocks other neurotransmitters that excite the neurons; its activity thus leads to feelings of fatigue. So, by blocking adenosine, caffeine changes peoples' moods and leaves them feeling more alert and awake.

Caffeine is also known to boost another neurotransmitter: dopamine, Ferre said. This neurotransmitter is often called the "feel-good" chemical, because it's responsible for feelings of pleasure and reward. It just so happens that tetrahydrocannabinol (THC), the active ingredient in marijuana, is also known to stimulate dopamine neurons throughout the brain, he said.

Indeed, one reason why people may like the combination of marijuana and caffeine so much is that caffeine can magnify the effects of dopamine released by marijuana.

"Caffeine increases tremendously the effects of a psychostimulant, including THC and cocaine," Ferre said. "So, any substance that releases dopamine, including THC, its effects are increased by caffeine."

That enhancement may be why more people are combining the drugs, but Ferre cautioned that doing so is a bad idea. Using caffeine with any psychostimulant drug, and enhancing the drug's high, can make the drug much more addictive than it would be if it was used alone, he said. [7 Ways Marijuana May Affect the Brain]

Ferre and colleagues published a 2014 study in The Journal of Neuroscience that tested the effects of combining THC with a compound called MSX-3 that mimics some of the effects of caffeine. In experiments on squirrel monkeys that were addicted to THC, the researchers measured whether a range of doses of the caffeine-like compound influenced the monkey's likelihood to give themselves more hits of THC.

The researchers concluded that the caffeine-like compound enhanced the effects of THC at any dose.

Caffeine "is not good, at any dose, to associate with THC," Ferre said.

Another cause for concern is that adding caffeine may worsen the memory impairment commonly associated with using marijuana, he said.

A 2012 study in rats, also by Ferre and colleagues, showed that combining caffeine with marijuana worsened the memory problems induced. The effect is likely to be particularly acute in teens, because their brains are still developing, Ferre said.

"The worst is with kids," Ferre said. "Caffeine can be a really powerful drug that can have strong effects on a developing brain."

Although Ferre's research presents significant warning flags about combining caffeine with marijuana, not all experts agree. [Marijuana Could Treat These 5 Conditions]

In general, there is not much research on marijuana and its effects, said Gary Wenk, a professor of psychology, neurology and molecular virology at the Ohio State University. Marijuana is classified as a Schedule 1 drug under the Controlled Substances Act, meaning the drug is considered to have a high potential for abuse and no medical use.

"There has been very little research, because there is a lack of funding," Wenk told Live Science. "The National Institute on Drug Abuse does some research, but it's all related to treatment or determining ways it's harmful. But otherwise, it's hard to get funded, because it's a Schedule 1 drug."

Despite the lack of research on marijuana's effects, an increasing number of Americans are using the drug. Currently, around one-fifth of Americans now live in states where marijuana is legal for adults to use recreationally, according to the Brookings Institution, and some 200 million live in places where it's legal to use the drug for medical reasons.

Aside from being cautious, in recognition of what research there is on the effects of combining caffeine and marijuana, Wenk said that users are, to some extent, on their own.

"When people ask, 'How will it affect me?' you have to ask, 'What are your genes? What are your vulnerabilities?'" Wenk said. "Combining the drugs will have a different effect on different people, so it can be hard to predict."