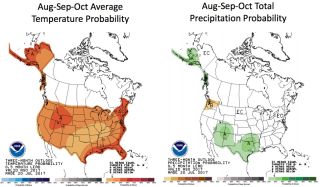 The three-month forecast shows that the U.S. will likely have above-normal temperatures (right) and only slightly above-normal rainy conditions in the American Southwest and Alaska (left).
(Image: © NOAA)

Grab that iced tea — much of the U.S. has had a hot summer so far, and it's only going to get hotter, according to a report released today (July 20) by the National Oceanic and Atmospheric Administration (NOAA).

For the next three months — August, September and October — the United States is predicted to have above-average temperatures, Dan Collins, a meteorologist and seasonal forecaster with the NOAA Climate Prediction Center-Operational Prediction Branch, said in news briefing today.

"You can see that across the entire United States, including Alaska, there is more of a chance that temperatures will be above normal," Collins said. [8 Ways Global Warming Is Already Changing the World]

The three-month forecast for rain showed that parts of Alaska, as well as the American Southwest and South, will have more rain than they typically do during the late summer and early fall. In contrast, parts of the Pacific Northwest are expected to have less rain than usual during that time, NOAA's precipitation map showed.

In August, most of the country will have warmer-than-usual temperatures, with the exclusion of the Southwest (parts of Arizona, Utah, Colorado, New Mexico and Texas). The main reason the Southwest won't have a hotter-than-normal August is because more rain than usual is expected in that area, Collins said.

There are several reasons for these above-normal temperatures. One is due to increased ridging in the atmosphere over the northern-central U.S. This means that "the circulation of the atmosphere is such that there is higher pressure in that region," which leads to higher temperatures, Collins said.

Moreover, long-term trends — that is, climate change — are playing a significant role this season. The NOAA Climate Prediction Center uses the past three decades as a reference period, and the "most recent decade is somewhat warmer than the previous three decades, from 1981 to 2010," Collins said.

That makes it the 41st consecutive June and the 390th consecutive month that was warmer than average, he noted.

While 2017 isn't as hot as 2016 was — the latter had El Nino to heat it up (El Nino is associated with warm waters in the Pacific Ocean changing the air-surface pressure and atmospheric circulation) — it's on track to be the second-warmest year in recent history.