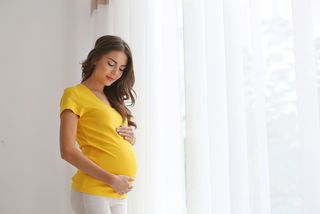 A 35-year-old Florida woman had been unable to get pregnant for 14 years, but her fertility problems were resolved in a most unusual way: A chemotherapy drug that she was given after being diagnosed with cancer triggered her ovaries to function better, a new case report reveals.

The woman was diagnosed with pancreatic cancer and had surgery to remove the cancerous growth. Then, she was treated with the chemotherapy drug gemcitabine.

The gemcitabine likely restored the woman's ability to ovulate and become pregnant, according to the case report, published online (July 11) in the Journal of Medical Case Reports. [27 Oddest Medical Cases]The woman had previously been diagnosed with polycystic ovarian syndrome (PCOS), which is one of the most common causes of infertility in women, the report said. The condition is caused by an imbalance of reproductive hormones, and it interferes with the growth and release of eggs from a woman's ovaries during ovulation each month.

"Gemcitabine was the only new variable that may have changed her hormonal ratios," said Dr. Stephen J. Carlan, one of the case report authors and the director of research in the department of obstetrics and gynecology at Orlando Regional Healthcare in Orlando, Florida. For most patients with cancer, this chemotherapy drug is known to be toxic to the ovaries, he noted.

Women with PCOS have irregular periods that may come infrequently, too often or not at all. This makes it challenging for them to become pregnant.

The woman in the recent case report had tried unsuccessfully to become pregnant for more than a decade. She had used fertility treatments, including taking medication to induce ovulation followed by having intercourse with her partner during her most fertile days, but these attempts failed. She had also lost weight, which is recommended for women with PCOS, because it may help them have more regular menstrual cycles, but this did not lead to conception either.

The woman had decided not to pursue in vitro fertilization or other methods to assist her in becoming pregnant. [Conception Misconceptions: 7 Fertility Myths Debunked]

After she felt a lump on the left side of her abdomen, where she had had been experiencing sharp pain for about two months, she went to the emergency room for an evaluation. She was admitted to the hospital, where imaging scans revealed pancreatic cancer.

The cancerous growth was removed from her pancreas in a complex operation known as a Whipple procedure. Eight weeks after her surgery, the woman started on the first of four rounds of chemotherapy with gemcitabine, followed by radiation treatments.

When her cancer treatments were completed, the woman suddenly started having regular menstrual cycles, Carlan told Live Science. Then, 15 months after being diagnosed with pancreatic cancer, she received some unexpected news for someone who had struggled for years with PCOS-induced infertility: She was six weeks pregnant, but had suffered a miscarriage.

Nearly three years after this miscarriage, the now-40-year-old woman first came to see the obstetricians who authored her case report. She was almost five months pregnant at the time.

The doctors suspect that gemcitabine restored the woman's fertility by acting on her body in way similar to a treatment for PCOS: a surgical procedure called partial ovarian destruction, or "ovarian drilling," Carlan said. This procedure destroys part of the ovary, and for reasons that are not known, it can trigger ovulation cycles in women who have not been able to become pregnant after taking medication to help induce ovulation.

The woman in this case did not have this surgery, but the case report authors said they suspect the gemcitabine had the same effect, and was likely responsible for her resumed ovulation and subsequent pregnancies. [7 Bizarre Drug Side Effects]

"It's possible that the drug changed the hormonal ratios, allowing for the return of ovulation," Carlan said.

The woman went on to have a healthy pregnancy and had a healthy baby by vaginal delivery at 38 weeks.