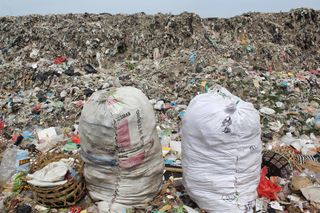 Plastic picked from the landfill for recycling.
(Image: © Jenna Jambeck/University of Georgia)

"I just want to say one word to you. Just one word. Are you listening? Plastics."

This famous line from the 1967 classic film "The Graduate" was meant as advice for Dustin Hoffman's character, Benjamin Braddock, but in retrospect, it should have been a warning.

A new study, which is the first global analysis of all mass-produced plastics ever made, finds that since large-scale manufacturing of plastics took off in the 1950s and until 2015, humans have produced approximately 9 billion tons (8.3 billion metric tons) of plastic. [In Photos: World's 10 Most Polluted Places]

Of those 9 billion tons, half was made in the last 13 years, said Roland Geyer, an associate professor of industrial ecology at the University of California, Santa Barbara, and lead author of the new study, which was published online today (July 19) in the journal Science Advances.

"You could say, 'What a phenomenal success story,' but I do think it will come with some heavy environmental collateral damage," he told Live Science.

As of 2015, about 7 billion tons (6.3 billion metric tons) of plastic have been disposed of as waste, with only 9 percent of it recycled, 12 percent incinerated, and a whopping 79 percent finding its way into landfills, the researchers report.

If this doesn't change, 13.2 billion tons (12 billion metric tons) of plastic waste will be disposed of in landfills by 2050, Geyer and his colleagues wrote in the study.

Those were really stunning numbers at the time, Geyer said, and he was compelled to get a more comprehensive view of society's plastic use and management. But now that he knows the big picture, Geyer said he's no longer surprised by the amount of plastic marine debris.

"It's a lot, but it's only a fraction of the total amount we're making," he said.

Currently, the world produces 440 million tons (400 million metric tons) annually, he said. The amount in the ocean is about 1 or 2 percent of that total. [In Images: The Great Pacific Garbage Patch]

Originally, the researchers compiled numbers for plastics that people use in everyday situations, such as packaging, household items, car parts, electronics and other common products. But then, Geyer said the researchers decided to include plastic fibers used in textiles, such as in fleece and polyester, which are used to make clothing, carpets, curtains and furniture.

"I was really surprised by how big the production numbers were," he said.

In 2015, 66 million tons (60 million metric tons) of synthetic fibers were manufactured, about as much as the amount of aluminum that was made in that same year, he said.

When the scientists looked at the life cycle of plastics, they found that 60 percent of all plastics produced has been discarded into landfills or some other part of the environment. Plastics, which are made from fossil fuels, do not biodegrade. Instead, they break down into tinier "micro-plastics," which have been shown to infiltrate marine and freshwater sources where their impact is still largely unknown, Geyer said.

Geyer is convinced that dealing with the plastic waste problem requires a solution that goes beyond recycling. "It's not up to the job," he said.

Rather, he said the problem needs to be tackled with the entire tool kit of sustainable materials management, which includes not only recycling but also substitution, reducing the amount of materials required to make a product or construct a building, and perhaps creating energy through incineration.

"Hopefully, everyone who reads this article will come away with the same idea, that we need to change the way we make use of and manage plastics," he said.