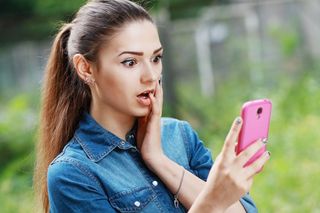 Recently, a fake photo of a baby girl with a sparkly piercing in a dimple on her cheek went viral and incited outrage from many who assumed the photo was real. Now, a new study shows why doctored images can fool so many: People really aren't very good at telling real images from fake ones.

In the study, people who were shown a number of real and fake images spotted the fake photos about 60 percent of the time, which is only a little bit above the 50 percent accuracy rate that would be expected by chance. What's more, when people were asked to specifically pinpoint what they thought was wrong with the photo, they correctly located the doctored portion of the photo only 45 percent of the time.

"Our study found that although people performed better than chance at detecting and locating image manipulations, they are far from perfect," Sophie Nightingale, a doctoral candidate in psychology at the University of Warwick in England and lead author of the study, said in a statement. "This has serious implications because of the high level of images, and possibly fake images, that people are exposed to on a daily basis through social networking sites, the internet and the media," Nightingale said.

For the study, the researchers started with 10 original photos depicting people in real-world scenes, like a man standing in a street or a biker posing by the Golden Gate Bridge. Then, the researchers doctored the images in various ways, creating a photo bank of 30 fake photos and 10 real ones. [Faux Real: A Gallery of Forgeries]

To doctor the photos, the researchers made some physically implausible changes — such as changing the direction of a shadow or distorting the angles of buildings — as well as physically plausible changes, such as airbrushing a person's appearance.

About 700 participants were shown 10 images from the photo bank (five real and five fake) and asked whether they thought each photo was digitally altered. Participants never saw the same photo twice — that is, if they saw a photo that was doctored in a certain way, they did not also see the original version, and if they saw an original photo, they were not also shown a doctored version.

"Even though people are able to detect [that] something is wrong, they can't reliably identify what exactly is wrong with the image," said study co-author Derrick Watson, also of the University of Warwick. "Images have a powerful influence on our memories, so if people can't differentiate between real and fake details in photos, manipulations could frequently alter what we believe and remember." [Why Do We Fall for Fake News?]

The researchers said they are now conducting further studies to determine if there are ways to help people spot fake photos with the naked eye. For example, it may be possible to train people to notice when photos defy the laws of nature — such as when the direction of a shadow wouldn't be possible given the light source seen in a photo, the researchers said.

Even looking at photo more closely may help people spot fakes. In a separate experiment, the researchers divided images into 12 sections and asked people to locate the section that was altered, regardless of whether the individuals originally thought the image had been altered. The researchers found that participants performed much better on this task; they located the doctored portion of the photo 56 percent of the time.

"The challenge now is to try and find ways to help people improve at this task" of spotting fake photos, Nightingale said. "We're conducting new research to see whether people can make use of [telltale] signs to help identify forgeries," she said.

The study is published in the July issue of the journal Cognitive Research: Principles and Implications.