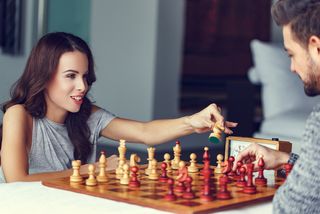 Anyone who has played a competitive game knows their own actions are affected by their opponent's moves. A baseball pitcher, for instance, might start throwing curveballs if he thinks the batter is ready for a fastball. Now, researchers in Switzerland have identified the part of the brain that's involved in those calculations — the place where our "theory of mind" gets worked out.

Using functional magnetic resonance imaging (fMRI) and a simple strategy game, the scientists found that an area called the right temporoparietal junction, or rTPJ, (located toward the back and side of the head, behind the right ear) becomes active when people try to figure out another person's beliefs and possible actions. The rTPJ connects two regions of the brain: one area that allows us to imagine other people's mental states (the theory of mind), and another that governs our sense of value, or how important that information is.

The finding could help researchers "probe deeper into disorders where the person has deficits in theory of mind," Christopher Hill, a doctoral student at the University of Zurich and the lead author of the study, told Live Science. Some people on the autism spectrum have this kind of problem, he said. [10 Things You Didn't Know About the Brain]

The rTPJ helps us update our own thoughts with information about what another person may be thinking in response to our actions, Hill told Live Science. For example, when person A wants to respond to something person B has done, it first estimates what person B will do in response to that.

The team tested the idea using a simple psychology strategy game called "Work/Shirk," which has two players, a manager and an employee.

Over several iterations, players can maximize their points if they correctly guess what their opponent is doing. A manager who decides not to inspect because they know the employee is working has guessed right. Similarly, employees would try to be working when inspected and shirking when not, and managers would try to catch the employees not working.

In the experiment, Hill and his colleagues used fMRI imaging scans and a technique called transcranial magnetic stimulation (TMS). They divided the 120 study participants into two groups, and the participants worked in pairs. For one group, the researchers used TMS while they scanned the brains of the players in the "employee" role. TMS involves inducing a current in a part of the brain with an electromagnet. That current can temporarily disrupt the functioning of specific brain regions. For the control group, the researchers scanned the participants' brains with an fMRI machine but did not use TMS.

It turned out that the group that received the TMS had more difficulty anticipating their opponent's moves, suggesting that the rTPJ is important in the process of that anticipation. [5 Interesting Facts about Human Cooperation]

Further, the fMRI scans revealed that the rTPJ became active as people played the game and started calculating how they could beat their opponent. The researchers saw increased activity of the brain as people tried to figure out what the other person was thinking.

"We had these neural effects if we looked for a correlation between the magnitude of disruption and how much weight people gave," to their thoughts about what other people believe, Hill said. The more that communication occurring between the rTPJ and the areas of the brain that govern how much we value something was disrupted, the less people tried to use their beliefs about opponents to win.

Both Hill and Christian Ruff, a professor of neuroeconomics at the University of Zurich who supervised the study, acknowledged that the data is a bit "noisy." For example, some people are very good at strategy games such as this one (rock-paper-scissors is another example), and some people are not, so the researchers tried to make sure the participants they chose were of roughly similar ability. In the future, the researchers want to do a more extensive study with more people, to confirm the findings.

"One thing that's interesting is that during strategic interactions, people play at different levels of complexity, and people who play at more complex levels beat those who play at lower levels," Ruff said. "The question is, can you teach this? Can you learn it?"

The study is published in the July 10 issue of the journal Nature Neuroscience.