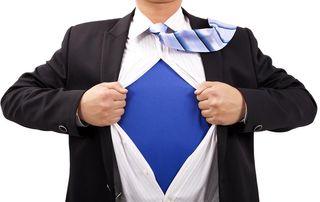 You may not think of yourself as a superhero, but most of us think we're above average.
(Image: © Tom Wang | Shutterstock)

On a scale of one to 10, you probably think you're a seven. And you wouldn't be alone.

While it's impossible for most people to be above the median for a specific quality, people think they are better than most people in many arenas, from charitable behavior to work performance.

The phenomenon, known as illusory superiority, is so stubbornly persistent that psychologists would be surprised if it didn't show up in their studies, said David Dunning, a psychologist at Cornell who has studied the effect for decades.

It happens for many reasons: Others are too polite to say what they really think, incompetent people lack the skills to assess their abilities accurately, and such self-delusions can actually protect people's mental health, Dunning told LiveScience.

Since psychological studies first began, people have given themselves top marks for most positive traits. While most people do well at assessing others, they are wildly positive about their own abilities, Dunning said.

That's because we realize the external traits and circumstances that guide other people's actions, "but when it comes to us, we think it's all about our intention, our effort, our desire, our agency — we think we sort of float above all these kinds of constraints," he said. [10 Things You Didn't Know About You]

In studies, most people overestimate their IQ. For instance, in a classic 1977 study, 94 percent of professors rated themselves above average relative to their peers. In another study, 32 percent of the employees of a software company said they performed better than 19 out of 20 of their colleagues. And Dunning has found that people overestimate how charitable they'll be in future donation drives, but accurately guess their peers' donations.

Drivers consistently rate themselves as better than average — even when a test of their hazard perception reveals them to be below par, said Mark Horswill, a psychologist at the University of Queensland in Australia.

Because even the worst driver may by chance avoid an accident, people are more likely to overestimate skills like that than concrete skills like chess or tennis, where the incompetent are trounced quickly, Horswill said.

In part, most positive traits — like being a good driver — are so vaguely defined that there's plenty of wiggle room to make them fit, Dunning said.  People also don't usually get honest feedback from others.

"People don't say to your face what they might say behind your back," Dunning said.

But in a strange twist, the most incompetent are also the most likely to overestimate their skills, while the ace performers are more likely to underrate themselves, because if they find a skill easy they assume other people do too, he said.

One group seems to be immune to such self-aggrandizement: People who are depressed or have anxiety don't overrate themselves, Horswill said. The more severe the depression, the more likely they are to underrate themselves. That suggests the illusion of superiority may actually be a protective mechanism that shields our self-esteem, he added.

"You think you're better than everyone else and that's actually good for mental health," Horswill said.

And the trend varies considerably with culture.

"North Americans seem to be the kings and queens of overestimation. If you go to places like Japan, Korea or China, this whole phenomenon evaporates," Dunning said.

While it's not possible to get a completely clear-eyed view of oneself, people can bring their self-perception more in line with reality, Dunning said.

For one, people should look to others whose lives inspire admiration, figure out what they're doing right, and try to emulate them, he said.

And since people are generally pretty accurate in assessing other people (just not themselves), people should be aggressive about getting — and taking to heart — constructive criticism from others, he said.

"The road to self-insight runs through other people," he said.