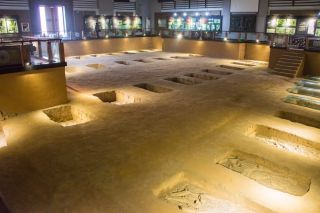 Human sacrifice victims buried at the Shang Dynasty Royal Cemetery were kept as slaves before being killed, archaeologists have found.
(Image: © beibaoke/Shutterstock)

At an ancient site of human sacrifice in China, war captives may have been kept as slaves for years before they were killed, a new study finds.

Archaeologists have previously uncovered evidence of ritual human sacrifice in many ancient societies, including the ancient Greeks, the Vikings, the ancient Maya, and the Aztecs and the Incas, as well as in ancient China.

Prior worked revealed an extraordinary number of ritual human sacrifices were conducted during the Shang dynasty, which spanned from the 16th century B.C. to the 11th century B.C. It is the earliest dynasty in China for which archaeologists have evidence. For instance, sacrificial pits are common across the entire site of the last Shang capital, Yinxu, which researchers discovered in 1928 in central China's Henan Province. Scientists have estimated that over the course of about 200 years, more than 13,000 people were sacrificed in Yinxu, usually males ages 15 to 35, and that on average, each sacrificial ritual there likely claimed at least 50 human victims. The biggest sacrifice found so far killed at least 339 people. [25 Cultures That Practiced Human Sacrifice]

Yinxu is also home to the earliest known writing in China, in the form of oracle bone inscriptions. Diviners carved these questions on turtle shells or ox bones, addressing the king's concerns and ranging from personal issues such as unsettling toothaches to state matters such as crop failures. These inscriptions also recorded the king's ritual activities, such as human sacrifices to the ruler's ancestors or the gods.

"It's really an amazing site on many levels," said study lead author Christina Cheung, a bioarchaeologist at Simon Fraser University in Burnaby, Canada. "The bronze artifacts, oracle bones, and bone artifacts are amazing, and the scale of the architectural structures is just enormous."

Oracle bone inscriptions from Yinxu had suggested that many sacrificial victims were captives from wars, but there was little direct archaeological evidence for this. To support or refute these claims, the researchersin the new study analyzed remains found in the royal cemetery of Yinxu, which contains both royal burials and more than 2,500 sacrificial pits.

In Shang China, there were two main types of human sacrifice, the "rensheng" and "renxun," Cheung said. The rensheng, which literally means "human offerings," were often mutilated and buried in large groups with little to no accompanying items. The renxun, which can be loosely translated as "human companions," were often buried with elaborate items, and previous research suggested these were most likely servants or family members of significant figures. The scientists in the new study analyzed bone samples from 68 victims found in three sets of sacrificial pits, all but one of whom were likely rensheng.

Archaeologists often deduce where ancient people came from by looking at the strontium isotopes in their skeletons' teeth. However, the majority of the rensheng that Cheung and her colleagues investigated had been all decapitated, making this approach impractical.

Instead, the researchers tested a different approach, analyzing the carbon, nitrogen and sulfur isotopes in these bones. These isotopes are typically linked with diet, and so may indirectly yield clues as to the skeletons' origins.

"We have provided the first direct evidence for a hypothesis that was until now only supported by ancient texts more than 3,000 years old," Cheung told Live Science. "It's like finding Troy and proving the Iliad was not completely fiction."

Were the victims laborers?

The researchers also found that while the larger bones of the sacrificial victims differed isotopically from those of the Yinxu locals, the smaller bones resembled those from the Yinxu locals. This suggests that the sacrificial victims lived for a few years in Yinxu — long enough for the local diet to start affecting their smaller bones, but not their larger ones. (Minerals and other nutrients in food seep into bones, and the presence is first seen in smaller bones and then larger bones.)

While many scholars of Shang history have contended that sacrificial victims were not used as laborers, these new findings suggest otherwise, Cheung said. She and her colleagues argued that it would not make sense to support a large number of captives for years without involving them in labor. Additionally, the researchers said, prior work suggested that Shang nobles offered captives for sacrifice upon request, which implied that they kept the captives for a span of time before turning them over to the king.

Future research can analyze more remains from Yinxu to reveal more about the nature of the site's residents and victims, Cheung said. "There are at least 3,000 sacrificial victims in the royal cemetery alone and a lot more in the royal palace area," she said.

The scientists detailed their findings online June 7 in the Journal of Anthropological Archaeology.