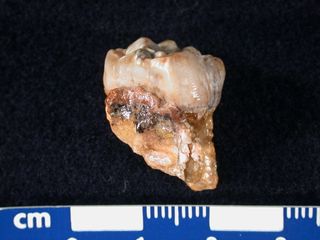 A high-tech analysis known as laser ablation is used to measure isotope ratios of strontium found in tooth enamel, which can aid in identifying specific landscape conditions where ancient hominids grew up.
(Image: © Sandi Copeland, University of Colorado Denver)

An accent may tell you where someone's from, but what if they can no longer speak? Researchers are analyzing the chemical make up of ancient human teeth to pinpoint where individuals grew up and how they moved around.

A high-tech analysis known as laser ablation is used to measure isotope ratios of strontium found in tooth enamel. Strontium is a naturally occurring element found in rocks and soils, and is absorbed by plants and animals. Since unique strontium signals are tied to specific geological substrates — like granite, basalt, quartzite, sandstone and others — they can help identify specific landscape conditions where ancient hominids grew up.

This image shows an ancient human, or australopithecine, tooth that was sampled using laser ablation. A series of tiny horizontal grooves left by the laser are visible towards the right side of the tooth crown. Traditionally, scientists measure strontium isotope ratios in a substance such as tooth enamel by drilling off a small chunk of tooth — maybe the size of half a peppercorn — dissolving it in acid, and chemically removing most of the dissolved material, except for the strontium.

"You end up with a solution that has basically just the strontium from the sample in some acid," said Sandi Copeland, visiting assistant professor at the University of Colorado, Denver, who also is affiliated with the Max Plank Institute for Evolutionary Anthropology in Leipzig, Germany. "You put that solution through the multi-collector mass spectrometer, which tells you the relative proportions of atoms with specific weights ­­— that is, the different strontium isotopes in the sample, which have slightly different weights."

The laser is a newer way to measure samples, and no lab chemistry is necessary. The laser itself is attached to the mass spectrometer.

"You put your sample, a tooth, into a small chamber," Copeland said. "On your computer monitor, you can see an extreme close-up of the sample, so you navigate to where you want to shoot the laser beam. You turn on the laser and watch as it moves across the sample leaving a small furrow that is about the width of a human hair and less than one millimeter long. It takes about 90 seconds. The material that is being vaporized by the laser is taken into the mass spectrometer and again, the mass spec measures atoms or molecules of specific weights."