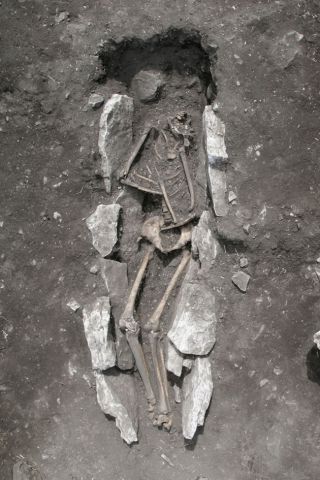 The 3,000-year-old skeletal remains of a teenage male were found buried at an altar used for sacrifice on Mount Lykaion. Part of the skeleton's skull is missing, according to archaeologists.
(Image: © Hellenic Ministry of Culture, Education and Religious Affairs)

A 3,000-year-old skeleton has been discovered at an altar dedicated to Zeus at Mount Lykaion in Greece, and archaeologists say the new finding may be the remains of a human sacrifice offered to the Greek god.

The discovery was announced Wednesday (Aug. 10) in a statement from the Hellenic Ministry of Culture, Education and Religious Affairs.

Archaeologists from the Mt. Lykaion Excavation and Survey Project excavated the skeleton, which appears to be that of a male teenager, this summer. Mount Lykaion is known to be the site of a sanctuary dedicated to Zeus, the ancient Greek god of sky and thunder. [The 7 Most Mysterious Archaeological Finds on Earth]

Since 2007, these researchers have been excavating a massive "ash altar" containing the remains of drinking cups, animal and human figurines, vases, coins, and a vast quantity of burnt animal offerings, most of which come from sheep and goats.

"Several ancient literary sources mention rumors that human sacrifice took place at the altar, but up until a few weeks ago, there has been no trace whatsoever of human bones discovered at the site," excavation leader David Gilman Romano, a professor of Greek archaeology at the University of Arizona, told the Associated Press.

The ancient writer Pausanias (A.D. 110-180) told of a legend he heard of a king named Lycaon who was turned into a wolf while sacrificing a child.

"Lycaon brought a human baby to the altar of (Zeus) and sacrificed it, pouring out its blood upon the altar, and according to the legend, immediately after the sacrifice, he was changed from a man to a wolf," Pausanias wrote in a book on the geography of Greece (translation from a "Description of Greece with an English Translation" by W.H.S. Jones, Litt.D., and H.A. Ormerod, Harvard University Press, 1918).

Archaeologists told the Associated Press that they don't know whether the teenager they found was sacrificed and that much of the altar has yet to be excavated.

"Whether it's a sacrifice or not, this is a sacrificial altar ... so it's not a place where you would bury an individual. It's not a cemetery," Romano told the news agency, adding that the upper part of the teenager's skull is missing.