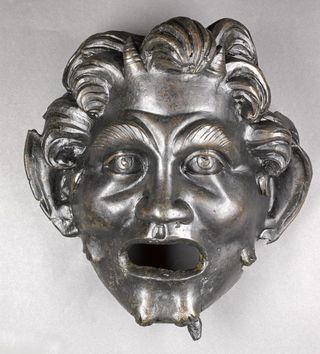 The bronze mask of Pan discovered near Hippos is unusually large compared to other such bronze masks of the Greek God that date from the same period.
(Image: © Dr. Michael Eisenberg/University of Haifa)

Archaeologists in northern Israel may have unearthed a sanctuary of the Greek god Pan in the ancient city of Hippos.

Excavations by the Zinman Institute of Archaeology at the University of Haifa have uncovered a monumental Roman gate, which may have led to a compound dedicated to the worship of Pan, the god of flocks and shepherds, who is depicted as half man and half goat in Greek mythology.

The new archaeological find may help researchers better understand previous discoveries in the ancient city. Last year, the archaeologists discovered a bronze mask of Pan, which is unusually large compared to other such bronze masks of the Greek God that date from the same period. The researchers had said that efforts to date the item or explain the function of the mask would be difficult. [The 7 Most Mysterious Archaeological Finds on Earth]

With the recent discovery of the gate, Michael Eisenberg, head of the expedition, said that the researchers now have a starting point that will help them look for answers.

"Now that the whole gate has been exposed, we not only have better information for dating the mask, but also a clue to its function," Eisenberg said in a statement. "Are we looking at a gate that led to the sanctuary of the god Pan or one of the rustic gods?"

The mask was found in the remains of a large stone building, and the archaeologists hoped that uncovering the rest of the building would offer context about the mask's origins.

Based on what they found in the excavation, the researchers estimate that the original gateway was about 20 feet (6 meters) tall, and that the entire building was likely even taller. They’ve also dated the building to the time of the Roman emperor Hadrian, who reigned from A.D. 117 to A.D. 138.

Eisenberg hypothesized that the site, which was found outside of the city limits, was possibly a compound for the god Pan, and that it had been built just in front of the entrance to Hippos.

"The mask, and now the gate in which it was embedded, are continuing to fire our imaginations," Eisenberg said. "The worship of Pan sometimes included ceremonies involving drinking, sacrifices and ecstatic rituals, including nudity and sex. This worship usually took place outside the city walls, in caves and other natural settings."

Hippos, also called Sussita, overlooks the Sea of Galilee and was established in the third century B.C. and destroyed by an earthquake in the year A.D. 749. Hippos is also of historic significance in Christianity, because it once formed what is known as the "Decapolis" — an area along the Jordan River described in the New Testament that, together with other ancient cities along the Jordan River, was the land in which Jesus performed miracles.

As more discoveries are made in future excavations, the researchers said that newly unearthed material will continue to shed light on the ancient city's history.

"What kind of worship of Pan or his fellow Dionysus, the god of wine, took place here in Hippos?" Eisenberg said. "To answer that question, we will have to keep on digging."

Hippos (Sussita) Excavations - A Portal for Pan by mayzenb on Sketchfab