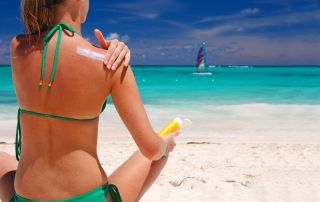 A new drug can give human skin a "natural" tan — it activates the same process that causes skin to darken in the sun, without exposure to harmful ultraviolet (UV) rays, according to early research.

In the study, researchers applied this drug to human skin samples in a lab dish and found that it darkened the skin, because it spurred production of the pigment melanin. And the drug doesn't damage DNA as the sun's UV rays do.

Much more research is needed to determine if the drug is safe before it could be used in people, the researchers said. But they are hopeful that the drug might actually protect people against skin cancer, because the presence of melanin in the skin is linked with a lower risk of skin cancer. [7 Common Summer Health Concerns]

"It's possible [the drug] may lead to new ways of protecting against UV-induced skin damage and cancer formation," Dr. David Fisher, a co-author of the new research and the chief of dermatology at Massachusetts General Hospital, said in a statement.

The new study builds upon the researchers' earlier work, which investigated the molecular signals involved in the body's natural tanning response. In a 2006 study, the researchers worked with "red-haired mice," which can't produce brown-colored melanin. These mice, like human redheads, have a genetic variation that prevents cells from setting off a cascade of signals that would eventually lead to brown melanin production.

In that 2006 study, the researchers found that a compound called forskolin could activate the production of melanin in these mice, because forskolin "bypasses" the genetic disruption and activates a protein farther along in the pathway that produces melanin, the researchers said.

But that study also found that forskolin didn't trigger the production of melanin in humans, likely because human skin is much thicker than mouse skin, and the compound could not penetrate human skin.

In the new study, the researchers used drugs called SIK inhibitors, which affect a protein further along in the melanin production pathway. The SIK inhibitor drugs darkened the skin of red-haired mice, and after the treatment was stopped, the tan gradually went away, just as a "real" tan would. When the researchers applied the drugs to human skin samples for eight days, they found that the drugs did penetrate the skin, and led to the production of melanin and subsequent skin darkening.

Still, there is reason to be cautious about the safety of SIK inhibitors in humans. SIK inhibitors work by turning on a gene called MITF, and mutations in this gene can cause cancer in certain cases, the researchers said. The SIK inhibitor drugs used in the study wouldn't be expected to cause mutations in the MITF gene, but further studies are needed to better understand the actions of these drugs, they said.

The study is published in the June issue of the journal Cell Reports. The researchers' institutions —  Massachusetts General Hospital and the Dana-Farber Cancer Institute — have filed a patent covering the findings of the study.