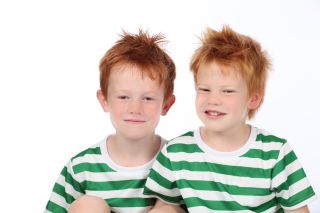 The redhead gene is recessive and can skip several generations.
(Image: © Thaiview | Shutterstock)

A British ancestry company, BritainsDNA, is now offering parents the chance to see if their children might inherit the so-called "ginger gene," the Telegraph reports. The test will scan each parent's DNA for signs of the so-called MC1R gene that causes redheadedness.

"Through a simple saliva test to determine deep ancestry, we can … identify whether an individual is a carrier of any of the three common redhead variants in the gene MC1R," said Dr. Jim Wilson, chief scientist at BritainsDNA, as quoted in the Huffington Post.

The gene for red hair is recessive, so a person needs two copies of that gene for it to show up or be expressed. That means even if both parents carry the gene, just one in four of their children are likely to turn out to be a redhead. As a result, families that have no redheads for decades can suddenly discover a carrottop in their midst.

"Families can carry a variant for generations, and when one carrier has children with another carrier, a redheaded baby can appear seemingly out of nowhere." Wilson said, as quoted in the Daily Mail.

Though there's no scientific evidence that redheads deserve their reputation for having fiery temperaments, some recent reports suggest having red hair is associated with a number of health issues. A study from the journal Nature found that the pigment pheomelanin, which is responsible for red hair, may also make redheads even more susceptible to melanoma than fair-skinned blondes, according to the Los Angeles Times.

And a widely reported study from the Journal of the American Dentistry Association found that redheads are more sensitive to pain and require extra anesthesia during surgery, according to ABC News.

But there may be some advantages to having red hair, too, EverydayHealth.com reports. The pale skin that redheads usually have is more efficient at soaking up sunlight — and sunlight is required for the body to manufacture vitamin D, an essential nutrient.

Worldwide, red hair is quite rare, and just over 0.5 percent, or one in 200 people, are redheads — this amounts to almost 40 million people, the Daily Mail reports.

In Ireland, an estimated 10 percent of the population has red hair, though about 40 percent of the Irish carry the recessive gene. In Scotland and England, 13 percent and 6 percent, respectively, are redheaded, according to the Daily Mail.

The DNA test will be offered by BritainsDNA at a genealogy and ancestry exhibition named Who Do You Think You Are, associated with the popular NBC television show and scheduled to be held in London next month.