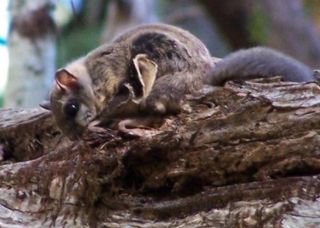 Here's a squirrelly surprise: The two species of flying squirrel that live in North America turn out to be three.

A new species of flying squirrel, the Humboldt's flying squirrel (Glaucomys oregonensis) has been hiding in plain sight along the Pacific Coast. Well, not quite plain sight — flying squirrels are nocturnal, so even though they live across North America, many people never see them. But the new species, named after the naturalist Alexander von Humboldt, lives in a well-studied habitat and still evaded notice.

"I was very surprised," said study leader Brian Arbogast, a biologist at the University of North Carolina at Wilmington. In previous research, Arbogast had found genetic differences among the northern flying squirrels (G. sabrinus) that live in Canada and the northern United States. But he never expected to find that some of those squirrels were their own species, he said. [The 12 Weirdest Animal Discoveries]

"Sadly, we don't know our planet all that well yet," said Joseph Cook, a biologist and curator of mammals at The University of New Mexico's Museum of Southwestern Biology, who co-authored the new research on the squirrel published May 30 in the Journal of Mammalogy.

The new squirrel is what is known as a "cryptic species." It looks just like another related species, but genetic testing reveals that the two aren't the same species, and that they aren't interbreeding.

Now, Arbogast and his colleagues have sampled from much larger populations of squirrels. They trapped many of the squirrels themselves, baiting wire-cage traps with a mix of peanut butter, rolled oats, bacon fat and molasses. Other samples came from tissues preserved in museum collections. Two study co-authors, Cook and Allison Bidlack of the University of Alaska Southeast, coordinated with marten trappers in Alaska and British Columbia to have them send samples from any flying squirrels caught accidentally, Arbogast said. Biologist Jim Kenagy of the University of Washington in Seattle helped secure samples as well.

In all, the researchers collected samples from 185 individuals and analyzed their mitochondrial DNA, genetic material from the cell's energy-converting organelle that is passed down through the maternal line. The researchers again found the strange genetic schism among northern flying squirrels, so Arbogast asked his graduate student, Katelyn Schumacher, now a doctoral student at Bowling Green University, to test the genetic sequences to see if the two kinds of northern flying squirrels were breeding with one another. They weren't. [4 Baby Squirrels Get Tails Entangled in Bizarre Video (Here's How)]

"It was at that point that we realized we were not just dealing with two types of northern flying squirrel, but with two distinct species that apparently were reproductively isolated," Arbogast wrote in an email to Live Science. "Huge surprise!"

So far, there's nothing physical or behavioral that differentiates the Humboldt's flying squirrel from northern flying squirrels, Arbogast said. The squirrels grow to about 15 inches (37 centimeters) long and glide from tree to tree using large flaps of skin that connect their front and back legs.

"We're discovering that dynamic biogeographic histories due to the ebb and flow of large glaciers and associated changes to habitat have had a large role in species and genome evolution," Cook told Live Science.

Arbogast and study co-author Nick Kerhoulas of Humboldt State University created maps showing the new species range, including an interactive one viewable with Google Earth. That map shows every squirrel in the study, color-coded by species.

The Humboldt's flying squirrel should be in relatively good shape from a conservation standpoint, Arbogast said, though populations in the San Bernardino and San Gabriel mountains of California are fairly isolated and could be at risk. G. sabrinus fuscus, a subspecies of northern flying squirrel found in the southern Appalachians, was listed as federally endangered between 1985 to 2013, when its population numbers recovered. Another subspecies of northern flying squirrel, G. sabrinus coloratus, remains on the endangered species list.