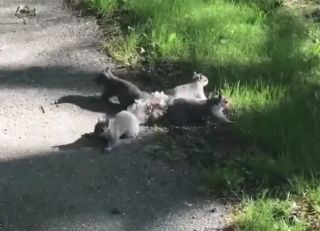 Four baby squirrels get their tails tangled in Bangor, Maine.
(Image: © A Day/YouTube)

A quartet of adorable baby squirrels recently got into quite a sticky predicament.

The four squirrels were found in Bangor, Maine, with their tails stuck together in a matted collection of plastic, twigs and straw.

Andrew Day saw the ensemble of squirrels hobbling across the grass with their tails fused "like a giant dreadlock, Day told The Bangor Daily News. After capturing a video of the odd scene, Day took the squirrels to a veterinarian, who liberated them.

But how, exactly, did these little squirrels get so tangled? [Photos: World's Cutest Baby Wild Animals]

One possibility is that they were tied together by a malicious person, though that scenario seems unlikely in this case, said Lucia Jacobs, a professor of psychology and neuroscience at the University of California, Berkeley, and the head of the Cal Squirrels project, which is aimed at studying the behavior of squirrels on campus.

"Some mean humans could have done it; but I don't think so, because you wouldn't be able to catch all [of the] squirrels together," Jacobs said.

The squirrels look to be about 10 to 11 weeks old, which makes such a malicious act more unlikely, Jacobs said.

"Their tails are really slippery when they're that young," Jacobs told Live Science. "If you did tie them together, they'd untie themselves because they're so slick."

Instead, the likeliest explanation is that the babies got their tails entangled in something sticky while in their nest, Jacobs said.

Though it sounds bizarre, such a phenomenon is not unheard of.

To stay cozy while they sleep, baby squirrels sit all bunched up, with their tails wrapped around one another. So one possibility is that they were entangled by some kind of human food, like a sticky candy, Jacobs said. But whatever the sticky material was, it probably wasn't edible, because they would have eaten it, she added.

More likely, tree sap kept these squirrels together, said Bill Bateman, a wildlife biologist at Curtin University in Perth, Australia. There have been a few reported examples of this phenomenon in the past, he said.

"One of the things that might happen is that when they use holes or they use dreys [squirrel nests] in pine trees, there's a lot of sticky sap. And they sit curled up with their tails together, and their tails then got stuck together," Bateman told Live Science.

Squirrels that find themselves in this knotty predicament may be facing their own version of an urban housing crisis, Bateman said. In cities, the plethora of human food options fuels an explosion in the squirrel population, but there's not a lot of real estate for building nests — tall trees with cozy holes or branching limbs for making their twig-based dreys, Bateman said. So just as humans in the big city do, city slicker squirrels get roommates — and lots of them.

"There are lots of extended families using the same holes or dreys in trees," Bateman said.

As a result, they may be a bit overcrowded in these holes, making it likelier for them to get entangled.

In the case of this baby squirrel quartet, they likely got entangled and were just coming out of their nest for the first time, Bateman said. They probably managed to make it a fair way down the tree before they started falling.

"The way they were all sort of moving along together, it wouldn't have surprised me if they'd been able to get quite a long way without falling," Bateman said.

Such squirrel entanglements may be more common than people realize. But it's likely that most of the squirrels that get stuck in sticky sap either die in the nest, or after falling out of it or being eaten.

"I imagine they'd make a nice supersize meal for any hawk that goes by," Bateman said.

In this instance, the squirrels likely would have faced such a fate if Day had not intervened, Jacobs said.

"It's very lucky he found them," Jacobs told Live Science. "There was an interested cat nearby."

A slightly different phenomenon also occurs in rats, known ominously as a "rat king." In a rat king, dozens of rats may get their tails tied together in knots. There is some debate about whether these more elaborate rat kings are the result of human malice or a natural phenomenon, Bateman said. [Rats and Lizards and Monkeys, Oh My! 9 Islands Ruled by Animals]

In medieval Europe, rat kings were surrounded by dark mythology. (Remains of rat kings can be seen in museums in Europe.)

"The occurrence of rat kings was supposed to be a bad portent," Bateman said.

That's because, though people hadn't explicitly connected bubonic plague to rat-borne fleas in medieval times, rat kings were more common when rat populations exploded, meaning plague was likelier to spread rapidly through the human population. People in that time might have unconsciously made the connection, he said.

No one knows exactly how the evocative name "rat king" came about, but it might have stemmed from a similar-sounding Germanic phrase, or from a mistranslation of "rat wheel," Bateman said.