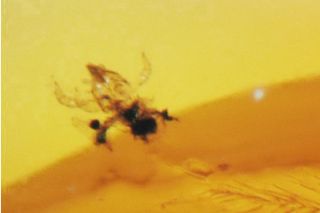 They probably never saw it coming. Minding their business, swimming around and then suddenly, their lives end in sticky resin from high up in a tree.

Bodies of freshwater creatures found frozen in amber have always puzzled scientists. Previously, scientists assumed the yellow-colored fossil of amber formed only on land. But researchers at the Museum of Natural History in Berlin recently discovered just how trees’ ancient, slow-moving sticky stuff might have caught swimming creatures and then turned to amber.

The scientists’ research suggests that resin dripped down the trunks of pine-like trees and fell into a swamp below. As the goo flowed into the water, it swallowed innocent swimmers-by, such as beetles and small crustaceans. The resin settled to the bottom and was covered by sediment.

After millions of years, the swamp dried up and the animal-rich resin hardened into amber.