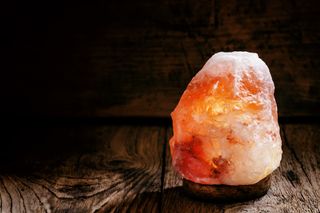 A new fad has been sweeping the nation. Himalayan salt lamps — crystals of reddish-hued salt from the world's most mountainous region, that have been chiseled out in the center to place a light bulb or heat lamp.

Sellers of these spa-like room accessories claim the lamps can "clear the air of electro-smog," oxygenate the brain, reduce symptoms of such mood disorders as seasonal affective disorder and even improve the immune system. Proponents claim these lamps work in two ways: They attract allergens and pollutants from the air to their surface, and they generate negative ions.

"They're pretty. It would be an attractive thing to have on your mantle or your bedside," said John Malin, a retired chemist formerly with the American Chemical Society.

However, there is no evidence that these lamps produce meaningful amounts of negatively charged particles, or ions, or that they reduce pollutants in the air. To assess the health claims, scientists need to answer three basic questions: Does Himalayan salt contain any special ingredients that could somehow positively affect health? Do negative ions benefit health? And if they do benefit health, do these lamps produce them in any quantity? Malin said. On all three counts, there is little-to-no evidence supporting the claims, he said.

"I kind of feel like it's three strikes and you're out," Malin told Live Science. "I'm sorry to be debunking this, but I just can't find anything scientifically valid in it." [Wishful Thinking: 6 Magic Bullet Cures That Don't Exist]

How it's supposed to work

Himalayan salt lamps are essentially hunks of rock salt mined from the Himalayas (typically in Pakistan) that have been hollowed out to allow a space for a light bulb or heating element. When they are on, they give off a soft, red glow.

But how exactly does a hunk of pretty salt accomplish the myriad health benefits sellers attribute to it?

According to Solay Wellness Inc., which sells these lamps, one key to Himalayan salt lamps is that they produce negative ions.

"Salt crystal is naturally hygroscopic, absorbing water molecules from the air. You will notice if your salt lamp remains unlit for long periods of time, it will begin to 'cry.' The heat from a small light bulb keeps these beautiful crystals dry and in turn releases negative ions (the healthy ones found in abundance in places like oceans, waterfalls, even your shower) into the air," according to the site.

Other sites claim that the crystals attract toxins or pollutants to the rock salt surface because water molecules in the air may also carry pollutants, mold and allergens. The water vapor touches the surface of the salt, depositing these pollutants, then releasing the water vapor, according to DrAxe.com.

How the lamps actually work

However, these claims have little evidence to back them up and do not make sense from a basic chemistry standpoint, Malin said.

One claim is that they produce negative ions that directly improve health.

Unless Himalayan sea salt contains high concentrations of other trace minerals compared with ordinary table salt, the predominant ions that could form from a salt lamp are sodium and chloride ions, Malin said.

"But salt is really stable, so you heat it up a little bit and nothing really happens," Malin said

To dissociate the two ions, people would need to raise the temperature to about 1,500 degrees Fahrenheit (816 degrees Celsius), which cannot be accomplished with a 15-watt light bulb. (If the lamps were hot enough to dissociate the two elements, they would present a fire hazard.)

If the negative ions produced come from trace minerals in the salt, then sellers should demonstrate that Himalayan salt contains meaningful quantities of those other ions, he added. So far, no scientist has bothered to test whether rock salt from Pakistan has unique trace elements at high concentrations, he said.

Some small amount of water vapor in the air might adhere to the salt's surface, and some of that water vapor might dissociate salt into sodium and chloride ions. But as soon as the water vapor dried, the two ion types would immediately recombine to form salt, so that process is unlikely to produce negative ions either, he said.

As for the idea that water vapor in the room attracts pollutants, then sticks to the surface of the lamp, that, too, makes little sense, he said. Some pollutants in the air might, by chance, stick to water vapor on the surface of the lukewarm piece of rock salt, but there's no evidence that the meager heat produced by a light bulb could produce significant amounts of pollutant filtering, he said.

"In terms of mass removal of pollutants from the air, I just don't think it can happen," Malin said. Instead, a chunk of charcoal with a fan blowing over it would likely have much better filtering properties, he added.

If salt lamps did generate meaningful concentrations of negative ions, would that be a good thing? Over decades of research, the evidence for negative ionization benefits on health are very weak.

A 2013 study in the journal BMC Psychiatry reviewed data from several studies found that overall, negative air ionization has no overall effect on anxiety, mood, sleep or personal comfort. However, those studies did document a slight reduction in depressive symptoms, with higher levels of impact from higher concentrations of negative ionization. The analysis also showed a slight improvement in seasonal affective disorder, even with lower ion concentrations. The explanation for this weak effect is that the sun's stronger rays in the summer produce more negative ions than during the winter, and negative ionizers are potentially mimicking those summer-like conditions, said Dr. Alan Manevitz, a psychiatrist at Lenox Hill Hospital in New York City. However, a more established way to mimic summer conditions is with light therapy, which has been studied more extensively, he said.

Overall, however, for major depression, "there's no strong research evidence that states that it benefits depression at this point in time," Manevitz said.

A few isolated studies have shown modest and equivocal effects from negative ionization. For instance, in 1981, researchers at the University of Surrey in England looked at the incidence of stuffiness, nausea, dizziness and headaches in people in an office environment. They found office air had fewer negative ions than is typical outside. So the team conducted a double-blind study and found that the reintroduction of ions reduced the incidence of these symptoms over a 12-week period. The findings were published in the Journal of Environmental Psychology. A 1993 study published in the Journal of Human Ergonomics found that negative ions could slightly affect people's circadian rhythms, although they had no impact on anxiety or exercise levels.

The strongest evidence supporting any benefit of negative ions is as an antibacterial agent. A 1979 study in the journal Nature showed that high levels of negative oxygen ions could kill bacteria. Ionizers could also reduce the prevalence of surface and airborne bacteria in refrigerators, according to a 2009 study. However, that research applied only to sanitizing food or work surfaces, and did not make any claims about health benefits.

The positive results seen in negative ionization studies may be caused by the placebo effect; the few studies showing benefits don't show a clear relationship between perceived benefits and ion concentration, Malin said. "You could have 300 [ions] per cubic centimeter or 1 million per cubic centimeter and people would say, 'Yep, I'm feeling better,'" Malin said.

That means it's reasonable to conclude that if there were no added ions in the air but people were told the air had been ionized, they would also report feeling better, he added.

"People are always looking for 'holistic' treatments that don't seem to cause systemic side effects and seem healthy on the surface," Manevitz told Live Science. "But consumers have to be careful."