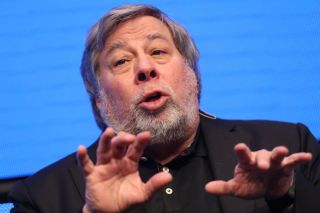 Apple co-founder Steve Wozniak speaks at the CUBE Tech Fair for startups in Berlin, Germany, on on May 12, 2017.
(Image: © Sean Gallup/Getty Images)

Apple may have long ago cemented its status as a technology titan, but Steve Wozniak thinks the next major technological innovation won't come from the company he co-founded.

In a recent interview with Bloomberg Canada, Wozniak discussed advancements in the technology sector. One major topic was artificial intelligence, which he said can be applied in various forms, ranging from understanding language to developing new games.

One of the most innovative and obvious applications, according to Wozniak, is in self-driving vehicles. It is in this arena that the Apple co-founder said he is betting on Tesla, and its CEO Elon Musk, to develop the next "moonshot."

"I think Tesla is on the best direction right now. They’ve put an awful lot of effort into very risky things," Wozniak told Bloomberg Canada. "They started with a car, the Tesla Model S, that made little sense in engineering terms in how much you have to build for what price and what the market will be."

Wozniak also noted Musk's desire to find innovative solutions to other transportation systems, including the "Hyperloop," a proposed transportation concept in which passenger-filled pods are accelerated through a low-pressure tube to their destination. Musk's other transit innovation involves car-carrying electric sleds. The project, known as the Boring Company, would require a series of subterranean tunnels through which sleds could carry cars at speeds of about 125 mph (200 km/h).