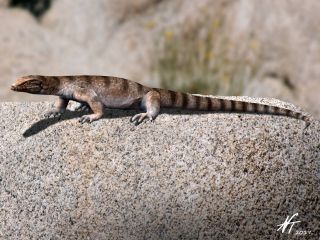 An artist's restoration of what the last monitor lizard in Europe might have looked like. A new fossil reveals this group survived in Greece less than a million years ago.
(Image: © Nobumichi Tamura)

A long-lost relative of today's Komodo dragons lived in Europe as recently as 800,000 years ago.

These reptilians were much smaller than the predatory Komodo dragons that live today in Indonesia. But the discovery of their fossils at a site in Greece was a surprise, because monitor lizards were thought to have vanished in Europe around 2.5 million years ago as climate conditions gradually changed.

"It's a survivor, let's say," said Georgios Georgalis, a doctoral candidate in paleontology at the University of Fribourg in Switzerland and the University of Torino in Italy. [In Photos: Rare Birth of 'Baby Dragons' at Slovenia Cave]

Monitor lizards are a big group. Scientifically, they're known as "varanids," and at least 70 species live today in Africa, Australia and Asia. The most famous species, the Komodo dragon (Varanus komodoensis), can grow to nearly 10 feet (3 meters) long.

Monitor lizards used to roam Europe, too, but they seem to vanish from the fossil record by the time of the Pliocene (5 million to 2.6 million years ago), when the climate took a turn for the cool and dry. The new specimen from near Athens is much more recent than that, dating back less than a million years.

"We [now] know that varanids survived at least until the middle Pleistocene," Georgalis told Live Science.

The new monitor lizard is known from only a few pieces of skull and jaw. Fortunately, Georgalis said, these specimens are a good basis for identifying varanids, because teeth and jaws vary widely between lizard species.

The fossil was found almost 30 years ago at a site called Tourkobounia outside Athens, Georgalis said. He discovered it in a collection on loan to the University of Torino.

"I was very, very surprised, happily surprised, when I saw this material, because it was highly distinctive," Georgalis said.

The biggest piece of bone is the right maxilla, or upper jaw, at just 0.7 inches (17 millimeters) long. Attached are two pointy teeth, which are only about 0.15 inches (4 mm) long. The second portion of the fossil is a piece of the lower jaw 0.6 inches (15.7 mm) long. One other tooth was detached from the jawbones.

Based on the anatomy, this monitor lizard was likely related to monitor lizards that had called Europe home in the Miocene, 23 million to 5 million years ago, when varanids were common on the continent. It was probably a relic of those old populations, Georgalis said, confined to the southeastern edge of Europe where the weather was still warm enough to support it.

Perhaps for that reason, the lizard was puny compared with today's Komodo dragons — much smaller than a comparable ancient European monitor lizard that measured 2 feet (60 centimeters) long, not counting its tail, Georgalis and his colleagues wrote May 12 in the Journal of Vertebrate Paleontology. The lizard was also smaller than earlier European monitor lizards, Georgalis said, and the size reduction may have been an adaptation for surviving in a cooler climate. Alternatively, the fossil may simply have been a baby.

Georgalis and his team are now hoping to find other varanids from Pleistocene Greece.

"We're trying to understand when is their extinction date, and why they became extinct from Europe," he said.