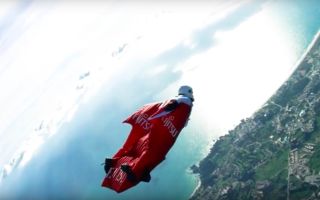 A wingsuit pilot is hoping to break four world records in two death-defying jumps from an altitude higher than where commercial airliners fly.

British daredevil Fraser Corsan is aiming to beat the current records for the highest altitude, highest speed, furthest distance and longest time flown in a wingsuit. Corsan will attempt his first jump from a high-altitude hot air balloon at 40,000 feet (12,100 meters) today (May 22), but the stunt will be subject to weather conditions and airspace clearance.

Wingsuits have become popular among skydivers and BASE jumpers because the suits effectively turn the body into a giant wing, allowing the wearer to glide rather than plummet to the ground. Fabric skins between the legs and under each arm inflate during flight, making the pilot more aerodynamic and enabling the wearer to control his or her heading by moving the body. [Up She Goes! 8 of the Wackiest Early Flying Machines]

But beating four world records will require more than just any old wingsuit. Corsan's suit has been specially shaped to the 42-year-old's body, and the wing profile has been optimized to maximize lift while also reducing drag.

This should allow very gradual descent rates without slowing Corsan down so much that it would prevent him from beating the speed record. The new records he hopes to set are a jump from an altitude of 40,000 feet, a top speed of 250 mph (400 km/h), a distance of 20 miles (32 kilometers) and a flight time of 10 minutes.

The stunt is not quite as physically demanding as the jump carried out by Austrian skydiver Felix Baumgartner in 2012. Baumgartner jumped from a record-breaking altitude of 23 miles (37 km), becoming the first person to free-fall faster than the speed of sound.

Nonetheless, because Corsan will be traveling at such high speeds and from such a high altitude, he will need a lot of safety gear. At 40,000 feet, the atmosphere is so thin that Corsan will have to carry an oxygen tank, a specialized mask and a regulator to ensure he can breathe during the jumps.

The air is also incredibly cold at that height: between minus 58 degrees Fahrenheit (minus 50 degrees Celsius) and minus 94 degrees F (minus 70 degrees C). The frigid temperatures combined with the high winds he will experience at that speed will put Corsan in danger of extreme windburns if any open skin comes into contact with the air.

For protection, Corsan will be wrapped in multiple layers of thin, thermally protective clothing. He will also have heated gloves and a helmet with thermal and audio shielding.

A GPS data-logging system will track Corsan's jump, including whether he breaks any of the world records. The system will also provide real-time audio feedback that will allow Corsan to track his progress and make adjustments during the flight.

The set of record attempts, dubbed Project Cirrus, will raise money for the British veteran's charity SSAFA — the Armed Forces Charity. The jumps are due to take place in the U.S. and Canada, with the second attempt scheduled for May 29.

According to the Project Cirrus website, Corsan wanted to fly from childhood and joined the U.K. military's Fleet Air Arm as a youngster, in hopes of one day flying the Harrier Jump Jet, an attack aircraft capable of vertical takeoffs and landings. But despite clearing the selection process, Corsan was unable to fly after discovering he is color blind.

Determined to fly anyway, Corsan went on to become one of the world's first 15 wingsuit pilots in the early 2000s and has carried out more than 1,300 wingsuit jumps since then. In his professional life, he started out as an aerospace safety engineer and now works for Fujitsu Defense in the air sector.