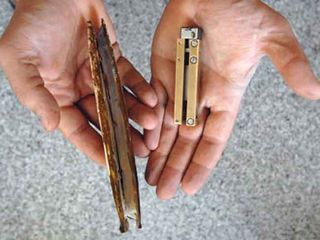 Inspired by the amazing ability of the small clam to dig and wedge itself far deeper and more securely than would be thought, they show the robo-clam.
(Image: © Donna Coveney)

Robot clams may one day help dig up and detonate buried underwater mines, researchers now reveal. They could also serve as smart anchors for robot subs or deep-sea oil drilling.

Mechanical engineers Anette "Peko" Hosoi and Amos Winter at the Massachusetts Institute of Technology designed robots after the Atlantic razor clam (Ensis directus) because it is one of nature's best diggers. Using its relatively simple anatomy, the razor clam — which the researchers dubbed the Ferrari of underwater diggers — can burrow into the bottom of its native mudflats at a remarkable rate of roughly a centimeter per second.

The clam digs with two motions — a push upwards with its foot, which mixes the mud grains with the liquid above, and a synchronized push down. This motion creates a liquid-like quicksand layer around its body, reducing the drag from burrowing and dramatically reducing the overall energy used.

Inspired by this principle, the researchers have created a simple robot about half the size of a lighter they are now testing out in the saltwater mudflats off Cape Cod. In experiments, the RoboClam digs just as fast as the living clam and is "small, lightweight, and does not use a lot of energy," Hosoi said.

"The thing that surprised me most is how robust the digging mechanism is," she added. "The clam's digging strategy works equally well in sand, glass beads, cohesive soil, mud."

When it comes to attacking unseen mines, Winter noted these explosives "are still visible with bottom penetrating sonar, and thus could be identified by underwater robots or ships. When a mine is identified, a RoboClam-like robot could be deposited next to the mine, dig down, and then detonate it."

In addition to exploding mines, Hosoi suggested the RoboClam could serve as a lightweight anchor that can dig itself in to hold down small robot submarines, which are routinely repositioned to monitor variables such as currents and temperature. The best anchoring technology out there is some 10 times worse than the clam, and most are 100 to 1,000 times worse, she explained. Such anchors could even reverse to make themselves easier to recover.

"The challenge in anchoring small underwater vehicles is that both space and power are severely limited," Hosoi said. "We set out to design an anchoring mechanism that is compact, low-power and reversible."

"There are locations in the ocean that are too deep to reach easily with remotely operated vehicles and conventional oil drilling technology," he explained. "In these ultra-deep water applications, we envision oil production equipment that automatically secures itself when it hits the bottom. We could use RoboClam-derived anchors to automatically affix the equipment, and automatically retract when the equipment needs to be recovered."

"Underwater cables for applications such as trans-Atlantic phone lines are difficult to install in less than 10 meters (32 feet) of water because this depth is too shallow for cable-laying ships," Winter said. "As a result, cable companies have to hire divers to bring the cable from 10-meter depth to shore, which is super-expensive and time consuming. We envision a robot that crawls along the cable and uses RoboClam motions to wiggle it into the soil, requiring no human intervention."

Currently the researchers operate the robot electronically via a tether, and make it open and close via pressurized air from a scuba tank.

"The next step is to build an autonomous version," Hosoi said. "I'm very optimistic about the next steps."

The researchers will present their findings on November 22 at the American Physical Society's Fluid Dynamics Conference in Minneapolis.