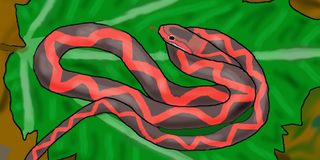 The newly identified snake species, Zilantophis schuberti, lived about 5 million years ago and bore broad wing-shaped projections on the sides of its vertebrae.
(Image: © Steven Jasinski)

Inside a 5-million-year-old sinkhole in Tennessee, at a spot dubbed Gray Fossil Site, scientists have unearthed the fossilized remains of an ancient "winged serpent" among hundreds of other snake bones.

Though it may sound like the stuff of nightmares, the winged snake was not gifted with flight — its name is in reference to the wing-like protrusions on its vertebrae. These protrusions drew the attention of the researchers, who realized the ancient beast was a new species.

Snakes' vertebrae are key to the classification of the creatures' fossils, according to study lead author Steven Jasinski, a doctoral student at the University of Pennsylvania and acting curator of paleontology and geology at the State Museum of Pennsylvania. [Shhh: A Gallery of Secretive Ground Snakes]

"Snakes don’t have arms or legs, but they have high numbers of vertebrae," Jasinski said in a statement. "These are often the bones that paleontologists use to identify fossil snakes."

The wing-shaped projections on the vertebrae's sides were likely where back muscles attached to the spine, according to the researchers.

Zilantophis was about as large around as a pointer finger, and measured only 12 to 16 inches (30 to 40 centimeters) long. The small snake likely lived in fallen leaves and ate insects, Jasinski said. Based on vertebrae features,Zilantophis' closest relatives are likely rat snakes (Pantherophis) and kingsnakes (Lampropeltis), according to the researchers.

Schubert’s Winged Serpent, along with the hundreds of other snake remains found at the Gray Fossil Site, will help researchers develop a clearer picture of the ancient ecosystem's biodiversity and the changes it experienced, according to the researchers.

"Snakes are important parts of their ecosystems, both today and in the past," Jasinski said. "Every fossil helps tell a story, and all those pieces of evidence give scientists a clearer picture of the past, as well as tools to predict how living communities may respond to changes in the future."

The newfound "winged serpent" was described in a study published online April 3 in the Journal of Herpetology.