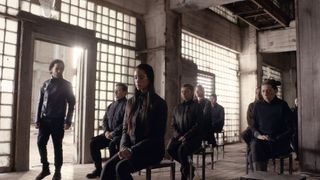 In the year 1 million, Earth's continents will look roughly the same as they do now and the sun will still shine as it does today. But humans could be so radically different that people today wouldn't even recognize them, according to a new series from National Geographic.

Premiering today (May 15), the new National Geographic Channel series "Year Million" investigates what humans might look like far into the future. In six episodes, the show explores the possibility of merging technology with the human body, the potential to drastically extend lifespans, the effects of virtual reality, the use of computers to merge human minds, the availability of new sources of energy and the possibilities of spreading humanity into outer space. [The 18 Biggest Unsolved Mysteries in Physics]

Brian Greene, a professor of theoretical physics at Columbia University in New York City, is one of the famed scientists featured in the series. Greene has written several books on string theory, a theoretical physics model that suggests the universe is made up of miniscule, one-dimensional strings. He has also explored the mathematics that could help explain how the universe has more than three dimensions. Greene said he doesn't think humans 1 million years from now will look much like people do now, and he said their lives will be so different that humans today wouldn't recognize them.

"We'd require an intense education to even understand the parameters of life a million years in the future," Greene told Live Science.

A look at what life was like 1 million years in the past provides an idea: At that time, modern humans didn't exist yet, and the most technologically advanced things on the planet were fire and the hand axe. (Picture trying to explain an office job to Homo Erectus, whose day was spent hunting and gathering wild foods.)

In the future, Greene said, there's a good possibility that humans will find a way to merge with their machines.

"We're already finding, on much shorter timescales, [that the] distinction between biological beings and artificial beings is starting to blur," he said. "I could see a new kind of hybrid species out of the biological and the synthetic."

In physics, humans may solve certain big problems, but that will likely only lead to new questions, he said.

"I guess my feeling is there are certain chapters in the story of physics we will complete," Greene said. "We'll truly understand fundamental forces [and] the basic ingredients of matter, and unite all the equations that describe [quantum mechanics and gravity] into some kind of unified theory."

That will be far from the end of the story, though. "With every chapter we complete, we ask questions we couldn't even formulate because we didn't have the concepts," he added.

One example is Albert Einstein's theory of general relativity. "Einstein comes and gives us general relativity in 1915, and with it, a new description of gravity. Now we can address questions of the origin of [the] universe," which wasn't possible with earlier physics, Greene said. In some cases, scientists may find that the very questions they were asking were the wrong ones. For instance, German astronomer Johannes Kepler, who was born in 1571 and died in 1630, spent decades trying to figure out why the Earth is located 93 million miles (150 million kilometers) from the sun.

Beyond scientists, others involved with the show include science fiction writers, whose job it is to dream up future worlds. One of these is Charles Soule, who has written several comics for Marvel and his own science fiction in the comic book series "Letter 44" (Oni Press, 2014), about a near-future mission to investigate an alien anomaly in the asteroid belt.

"The year 1 million concept — it's like an abstract," Soule said. "Take humanity, and it's accelerated far beyond where we are today, where most of the technological problems today are kind of solved."

This would mean humans would still be solving problems, but these would likely be different problems, such as figuring out the role of artificial intelligence or what it means to be human in a world that is dominated by technology, he said.

Those kinds of questions can come up even in superhero-themed books, though science fiction is where Soule said people can think through "far-out, crazy stuff" and its implications — which, he said, is part of the job of the science fiction genre.

Soule added that even though science fiction isn't often right in the details, its influence is felt in many areas. The TV series "Star Trek," for example, influenced the design of gadgets such as flip phones and the concept of touch screens, he said.

"The ideas we put into stories reflect the world we live in," Soule said.

The world of year one million will certainly be interesting, Greene said. "The only pity is that we won't be here to see it," he added