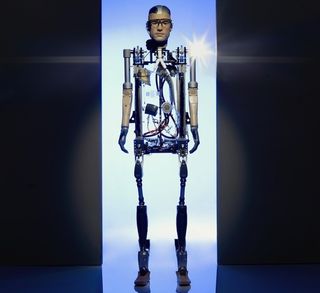 The Bionic Man is the world's first robot human made entirely of prosthetic parts.
(Image: © Courtesy of Smithsonian Channel)

He walks, he talks and he has a beating heart, but he's not human — he's the world's first fully bionic man.

Like Frankenstein's monster, cobbled together from a hodgepodge of body parts, the bionic man is an amalgam of the most advanced human prostheses — from robotic limbs to artificial organs to a blood-pumping circulatory system.

The creature "comes to life" in "The Incredible Bionic Man," premiering Sunday (Oct. 20) on the Smithsonian Channel at 9 p.m. EDT/8 p.m. CDT. [Watch Video of the Bionic Man]

Roboticists Rich Walker and Matthew Godden of Shadow Robot Co. in England led the assembly of the bionic man from prosthetic body parts and artificial organs donated by laboratories around the world.

"Our job was to take the delivery of a large collection of body parts — organs, limbs, eyes, heads — and over a frantic six weeks, turn those parts into a bionic man," Walker told LiveScience during an interview. But it's not as simple as connecting everything like Tinkertoys. "You put a prosthetic part on a human who is missing that part," Walker said. "We had no human; we built a human for the prosthetic parts to occupy."

The robot, which cost almost $1 million to build, was modeled in some physical aspects after Bertolt Meyer, a social psychologist at the University of Zurich, in Switzerland, who wears one of the world's most advanced bionic hands. [See Photos of the Bionic Man]

The bionic man has the same prosthetic hand as Meyer — the i-LIMB made by Touch Bionics — with a wrist that can fully rotate and motors in each finger. The hand's grasping abilities are impressive, but the bionic man still drops drinks sometimes.

The robot sports a pair of robotic ankles and feet from BiOM in Bedford, Mass., designed and worn by bioengineer Hugh Herr of MIT's Media Lab, who lost his own legs after getting trapped in a blizzard as a teenager.

To support his prosthetic legs, the bionic man wears a robotic exoskeleton dubbed "Rex," made by REX Bionics in New Zealand. His awkward, jerky walk makes him more Frankensteinian than ever.

But it doesn't end there — the bionic man also has a nearly complete set of artificial organs, including an artificial heart, blood, lungs (and windpipe), pancreas, spleen, kidney and functional circulatory system.

The artificial heart, made by SynCardia Systems in Tucson, Ariz., has beenimplanted in more than 100 peopleto replace their ailing hearts for six to 12 months while they wait for a transplant, Walker said. The circulatory system, built by medical researcher Alex Seifalian of University College London,consists of veins and arteries made from a polymer used to create synthetic organs of any shape.

While it might not satisfy the Scarecrow from "The Wizard of Oz," the bionic man's "brain" can mimic certain functions of the human brain. He has a retinal prosthesis, made by Second Sight in Sylmar, Calif., which can restore limited sight in blind people. He also sports a cochlear implant, speech recognition and speech production systems.

The engineers equipped the bionic man with a sophisticated chatbot program that can carry on a conversation. The only problem is, it has the persona of "an annoying 13-year-old boy from the Ukraine," Walker said.

The most unnerving aspect of the bionic man, though, is his prosthetic face. It's an uncanny replica of Meyer's face. In fact, when Meyer first saw it, he hated it, describing it on the show as "awkward."

The bionic man successfully simulates about two-thirds of the human body. But he lacks a few major organs, including a liver, stomach and intestines, which are still too complex to replicate in a lab.

The bionic man brings up some ethical and philosophical questions: Does creating something so humanlike threaten notions of what it means to be human? What amount of body enhancement is acceptable? And is it wrong that only some people have access to these life-extending technologies?

The access issue is especially troublesome, Walker said. "The preservation of life and quality of life has become basically a technical question and an economic question."

The bionic man made his U.S. debut at New York Comic Con Oct. 10-13, and he will be on display at Smithsonian's National Air and Space Museum in Washington, D.C. this fall.